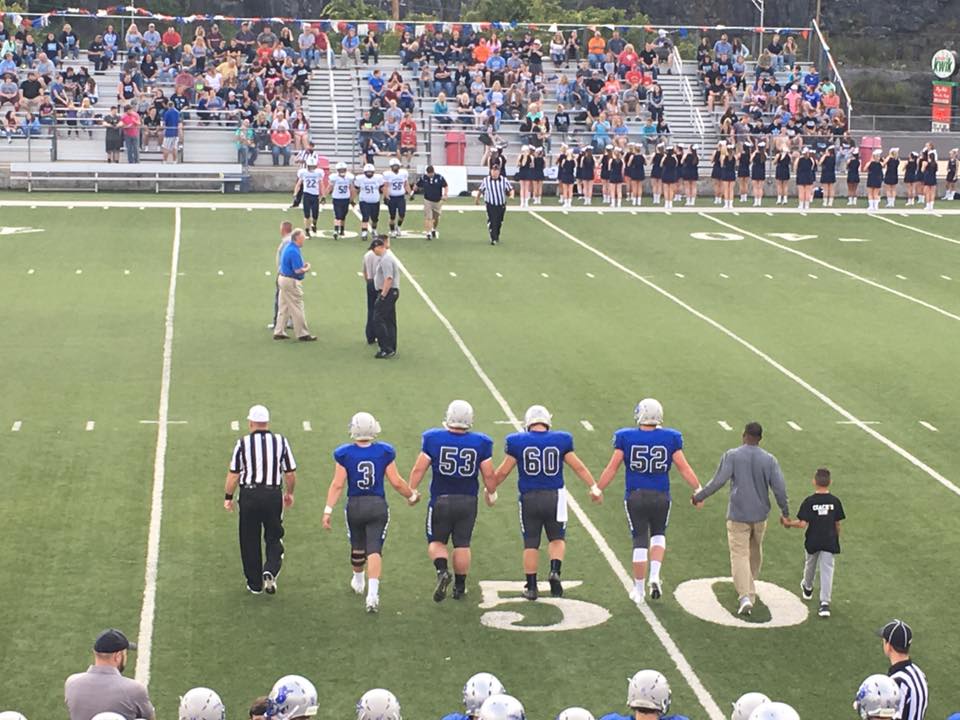 As you can easily see from the picture attached as the featured photograph to this article, Dave Jones, head coach at Phelps High School in tiny Phelps, Kentucky loves his players. He may be hard on them and he may chew their butts but; in the end, their interest is his and the remonstration was both earned and in their best interest and only because he loves them. In return, they love him too. It is this type relationship between coach and player which makes football the greatest game there is. It is this type dynamic which has led Phelps to some of its most successful seasons in the program’s history with Dave Jones at the helm and why they will continue to improve. Can’t do it all on love, the team has to have some Jimmies and Joes, like Marcus Layne for instance.

Marcus came over to Pikeville for the Mountain All-State Football Combine and, though he may not have left winning top honors in any particular position, he did demonstrate that he is a player worthy of being monitored going forward into the upcoming season. Layne’s listed positions are primarily, DE, while being a two-way player, at Class 1A Phelps High School, with deployment at OT up front. Lane is 6-3 and weighs 220 pounds with plenty of frame to add good weight to remain at tackle offensively and the length to grow into a college player at the position.

At first glance, regarding this combine numbers, one wants to say the rising junior isn’t fast enough in straight line speed to be a Defensive End at the next level as his forty times were 5.36 and 5.2 seconds respectively. However, his spacial quickness and change of direction speed are good. His pro agility shuttle best time was 4.73 seconds with his L-cone drill being 7.5 seconds each time he ran the same. Marcus acquitted himself well in the weight room where he repped the high school combine weight of 185 pounds on the bench press 16 times. That would translate to an approximate, one-rep, bench press maximum lift of just under 280 pounds, which is above average strength for a rising junior edge defender or for an offensive tackle at his stage of development, for that matter.

In any event, KPGFootball will be keenly monitoring this prospect’s junior campaign as he plays for Coach Dave Jones’ Phelps High School Hornets. It’s going to take quite a few players the caliber of what Phelps had at the Mountain Combine for Phelps to play football on par with it’s Mountain brethren, some of whom are virtually yearly State Championship contenders in their respective classifications. That aside, the Hornets can scale to untold heights by sticking together and listening to the man chosen to lead them. It’s going to take commitment to the craft and leaning on each other to get to where they all appear to want to go. Most importantly, from where we stand, David Jones is the right guy to get them there.