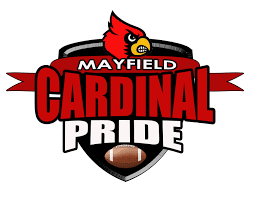 They go about the business of winning football games. No glitz, no glam, no pizzazz, just victory on victory on victory. They are the Mayfield Cardinals and they make winning as monotonous and common place as a yawn. We, here at KPGFootball have picked them in our preseason poll in Class 2A to win the title in 2018. Why not? I mean the Cardinals have been to the State Championship game 22 times, winning 12 as a program. They are the third winningest high school football program in the history of Kentucky behind Highlands and Male and the 5th winningest program in the history of high school football in the United States of America. I suppose picking them to win a State Championship in football is not really much of a prediction. One can almost assuredly predict they will play for one.

Cardinal players embody the good of the whole over the individual as individual Cardinals tend to get neither coverage nor attention. However, isn’t the team itself a work of art? Yes it is. The Cardinals have plenty of individual players, don’t you worry about that my friend. The Cardinals returnKent Trey Matthews who ran the football a season ago for over 1,000 yards in only 110 attempts and 11 TDs. The Cardinals return Travon Halliburton who scored 5 rushing TDs himself over his 70 carries for 531 ground yards. The Cardinals return Connor Guthrie who carried it 62 times for 397 yards and 5 rushing TDs in addition to his completing 37 of his 59 passing attempts for 626 passing yards and 9 aerial scores. The Cardinals return Jordan Harrison and his 31 receptions for 606 yards receiving and 10 TD receptions. Also back are Jack Murrell (27 receptions, 460 receiving yards, and two TD receptions) and Matthews who, in addition to his rushing contributions, also caught 34 balls for 598 yards and 11 TD receptions making him one of the most complete and dangerous weapons on any roster anywhere in the Western part of Kentucky. Oh yeah, my bad, almost forgot that Daniel Alonzo is also returning. Alonzo had 33 receptions for 388 yards receiving and 3 TD receptions a year ago. But the most important returner for Coach Morris’ Cardinals may be the straw which stirs the drink, Class of 2020 QB, Jayden Stinson.

Stinson is listed at 6-2, 200 pounds on last year’s roster with our not being able to find dimensions different from that anywhere during our online research. What we can tell you is that Stinson was a steady and impressively efficient performer in an offense which was the most balanced in Kentucky last year. The Cardinals ran for 2,870 yards a season ago and threw for 2,967 for as close to a 50/50 distribution between ground and aerial yards as one might ever be able to imagine. I have heard teams call themselves balanced, but Mayfield, at least last season, was almost perfectly balanced offensively which explains why they would average 47.4 points per game prior to playing Danville in the State Championship game. At the controls for a lot of the offensive balance was a quarterback who, himself, had the chore of replacing three year starter at the position, Landon Arnett, coming into the 2017 season. Jayden Stinson, who no one could possibly had forecast would be such an able replacement for the QB which had graduated, on the year, completed over 64% of his passes (116 for 183) for 2007 yards and 24 passing TDs while throwing only 5 interceptions. In a near perfect game late in the year against Caldwell County, a team the Cardinals humiliated 55-14, Stinson was 10-12 for 265 yards with a QB rating of 158.33.

For a team unconcerned with individual achievement, a team which strives for the betterment of the collective over the individual, a team which plays its assignment whether its accomplishment serves the individual’s ends or not, Mayfield appears to have some individual football stars on its 2018 roster regardless. At KPGfootball, we assure you one such star is playing quarterback.