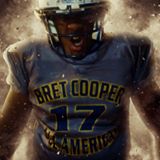 It is the premier middle-school football All-American game in the country and it has dipped into the rich, fertile, talent, once again, to invite one of Kentucky’s top rated linebackers in the Class of 2022 in Oldham County’s Will Darragh. Darragh, who has before been compared to one of the Class of 2021’s top linebackers, Austin Gough from Owensboro Senior, had an incredible combine when auditioning for the Kentucky Future Stars in Louisville. The 6-0, 185 pound linebacker/running back, who was 14 at the time of the combine, ran the 40 yard dash in 4.84 seconds and the pro-agility shuttle (5-10-5) in 4.63 seconds. Darragh has since been timed in the 40 at 4.72 seconds and has shuttled in 4.62 since Louisville.

Darragh, underwent his knee being scoped for fragments, which is a very benign procedure, shortly prior to playing in the Tennessee-Kentucky Future Stars Classic, and wasn’t fully released to even play in that game until June 12. As a result of that procedure, he has been advised to hold off lifting just yet so he hasn’t been able to fully participate in the high school’s Strength & Conditioning program. Prior to that procedure, Will had just started lifting where he was already benching 185, squatting 275, pulling 315 (deadlift), and power cleaning 185 (explosive). Those numbers will only rapidly and dramatically increase. During the Future Stars’ Classic, in which he played just 21 days post-op, Darragh still showed why he is a fixture on Team Kentucky whether it be FBU or Future Stars by recording 5.5 tackles. KPGFootball can assure you that is quite good in a game where plays are limited, per player, owing to every member of the roster being an All-Stater.

Like I alluded in the first paragraph of this article, this isn’t the first time Bret Cooper has mined the gold laden recruiting fields of Kentucky Middle School football for All-Americans to play for its East All-American teams which is riding a two game winning streak in the East vs. West format. In 2016, William Long of Hopkinsville and Austin Gough of Owensboro Senior led the East team to a 22-6 victory over the West counter-parts. Long, for his efforts was awarded the JJ Watt Trophy for the game’s outstanding defensive player. As a freshman starter at Hopkinsville High School, Long played 49 quaters of varsity football at left guard, center, and right guard, was selected a Freshman All-State football player, was one of three Kentucky frosh nominated for the MaxPreps Freshman All-American team, and won the 250 pound weight-class State Powerlifting Championship with a combined lift of 585 pounds (bench and power clean).  Just last year, Will Hughes from Hopkinsville and Jackson Smith from Boyle County led the East to its second, consecutive victory, 20-0 over the West All-American team. Smith was awarded the Luis Zendejas Award as the country’s top, middle school placekicker.

In 2016, Austin Gough gained 150 yards rushing from scrimmage in the game but lost out in the MVP race to dual-threat QB Shane Hamm from Ohio. Hamm, as a freshman in High School, led Archbishop Hoban to the Ohio State Football Championship and set the Ohio freshman record with 28 TD passes over his initial season. Gough led the Red Devils in tackles as a freshman starter with 92 stops, was selected a Freshman All-State linebacker and nominated for the MaxPreps, Freshman All-American team. Last year, the East team was quarter-backed by Ty Simpson from Martin, Tennessee. Simpson has already been offered by Michigan, Tennessee, Indiana, and Kentucky, among others, though he hasn’t yet attended a 9th grade class. Suffice it to say, the very best middle school players, across the nation, play in this game and Kentucky’s own have left a considerable mark on the game with performances of which the entire Commonwealth can be quite proud. We believe Oldham County’s Will Darragh will follow in this very fine tradition.