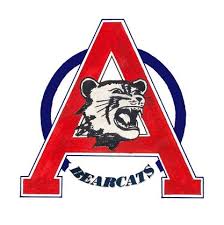 There is a lot of excitement around Bearcat Football and the Anderson County, Kentucky community. Why shouldn’t there be? They have probably the biggest transfer in Kentucky football in Charles Collins, who last year lead Class 5A, Montgomery County, by rushing for 2004 yards in 13 games on 194 carries while scoring 29 rushing TDs and averaging 154 rushing yards per contest. Collins averaged, a season ago, 10.33 yards per rushing attempt. They have one of the very best Defensive Ends in Kentucky in Darian Dearinger, a freshman All-Stater, who at 6-3, 238 pounds doubles as a TE on offense. They ran the ball last year for 2,957 yards without Charles Collins and have one of the best running backs in Kentucky’s Class of 2020 in Zach Labhart who, himself, gained 983 yards a year ago with 12 rushing TDs in 196 carries for over 5 yards per attempt. Labhart is a feature back in any backfield in Kentucky’s 5A classification next year which doesn’t also have a Charles Collins to whom to hand the football. After experiencing two, back to back, subpar seasons at ACHS in 2015 and 2016, the Bearcats rebound in 2017 to go 8-4. Things are looking pretty rosy. So the real key to next year’s success may be in the backfield, but it may not be at running back.

Anderson County entered last season with a controversy at QB. Should they go with the more experienced and older Tyler Peters (Class of 2018) at the position or throw caution to the wind and start freshman, former middle school Team Kentucky player, Jagger Gillis? The Bearcats elected to go with Gillis and Gillis, by the end of the year, looked like a very different player than the one whom was under center during the first half of the year. On the year, his statistics were less than stellar. Gillis, in 11 games, threw the ball 48 times, completing 18, for 303 yards passing and 5 TDs versus 6 interceptions for a QB rating of 99.9. One the ground, while Gillis gained 290 yards, he also lost 156 for a net rushing total of 134 yards and 2 rushing TDs.

Now I have had the opportunity to talk with an Assistant Coach on the Bearcat Coaching staff yesterday about Gillis, Coach Chris Ezell. He told me Gillis was feeling his way through early in the year but just starting to get it figured out as the season was ending. It is Coach Ezell‘s belief we will see a much more confident, and competent, player under center when the 2018 season begins. For a team which only threw for 405 yards all season long in twelve games in 2017, that is very good news in deed.