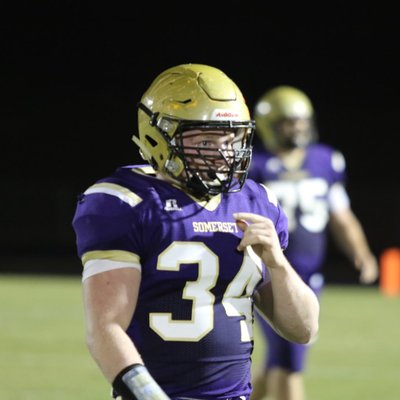 As we continue to crescendo to the opening of the 2018 High School football season, we at KPGFootball continue to feature the very best players in the Commonwealth of Kentucky. Whom we believe to be the best inside linebacker in Kentucky is Somerset’s Peyton Hatcher. There are kids with stature whom a college hopes may, one day, become a football player and then there are football players. By every known definition of the word, the 5-9, 213 pound, Briar Jumper is a football player. Pound for pound, he is also the strongest and most explosive player in the Commonwealth too.

Peyton has had a long and productive career, spanning back several years, of being the leading linebacker in his class. In 2013, he played in the middle school All-State game and for the Kentucky Future Stars. He was Captain of the Future Stars and played for the Kentucky FBU team in 2014-15 while setting a middle school bench press state record of 275 pounds. He lettered in his freshman season (2015-16) and was selected to the Offense/Defense National Undergraduate All-American game. He started in 2016-17 and, defensively, was the on-field defensive signal caller. In 2017-18 (last season), he led the team in tackles with 122, was the team captain, was awarded All-County, All-District, and Honorable Mention AP All-State while being selected this time to the National Underclassman All-American Game winning the Defensive MVP of the game for the North Team. The defense he anchored at Somerset High School in 2017 surrendered, in spite of a draconian schedule, 119 yards rushing a game and a little over 15.66 points per outing.

This past year, Peyton won the State Championship in Powerlifting in the 205 pound weight class with a combined lift of 610 pounds (bench and power clean). Peyton, at that particular meet, bench pressed 365 pounds and power cleaned 245 pounds with neither lift constituting his best lift. You would have to have before competed as a Powerlifter to understand what I am about to say, but you tend to make sure you rack enough to win as opposed to necessarily lifting all you can. Peyton bench presses 395 pounds, has repped the NFL Combine weight of 225 pounds, 25 times, has run a 4.87 40 yard dash time and pro-shuttles (5-10-5) in 4.3 seconds.

So here’s what we are telling you…players can’t control, absent drastic and illegal ingestion of dangerous substances, their frames. Only God Almighty determines what height a prospect is, what his wing-span may be, you know, his measurables. How strong, powerful, explosive, and, to at least some extent, how fast and quick a prospect is can be attained through hard work, discipline, and effort. I love prospects like Peyton Hatcher because he has tirelessly worked to control those aspects over which he has control, even (and most importantly) in the class room where he carries a 3.2 GPA and has a 25 on the ACT, making him a full qualifier and eligible for academic, as well as athletic, scholarship consideration. He can’t make himself tall, but boy has he made himself smart, eligible, strong, powerful, explosive, and as quick and fast as any person can improve one’s speed and quickness. Most importantly he has made himself a damn good football player and student. In the end, no one will work harder than Peyton Hatcher to insure the Peyton Hatcher who takes the field for your football team is badder, meaner, stronger, more powerful, and more explosive than any other person on the field that (or any) day. As a football coach of a college or high school team, you can’t ask for more than that!