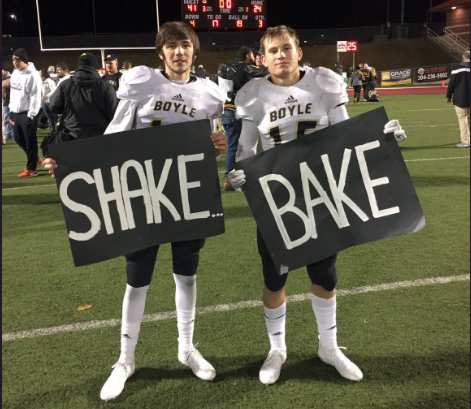 They are two of Kentucky’s very best in the 2020 class of prospects, one at his position (QB) and one at both his positions and as just an overall athlete (WR,DB). They have a nickname around both Boyle County and, now, Kentucky. They are Reed Lanter (“Shake”) and Reese Smith (“Bake”) and “Shake and Bake” are not just best friends but non-consanguine brothers. If you doubt how close they are ask either of them.

Together, the two of them comprised the most potent passing attack in Kentucky High School Football in 2018. Together, they were the scourge of Class 3A!

Reese Smith is a former KPGFootball Sophomore All-Stater too who has additionally been recognized, multiple times, as an All-State football player by both the Coach’s and Media polls. Smith is universally ranked, by every recruiting service, as ranking among Kentucky’s most sought after prospects in the 2020 class. Smith is sporting present offers from UK, UT, W.Va., APSU, Ball State, Cincinnati, Duke, Troy, and Louisville. We hate to tell the in-state hopefuls, but early indications are that both Duke and West Virginia may lead for this star prospect.

In 2018, Reese caught 53 of Lanter’s passes, for 1,173 receding yards with 20 TD receptions. While only playing 12 games on defense, Reese tallied 55 tackles, 43 of which were solos, with two forced fumbles, recovering one. Smith is a nightmare to contain returning either kicks or punts and is an All-Region selection in basketball, just to further demonstrate both his vertical explosiveness and athletic prowess.

Boyle County will play 4A football in 2019 after having won the State Football Championship in 2017, finishing 14-1, and losing in the semi-finals to Corbin in 2018, finishing 13-1. So how will Boyle County fair stepping up in classification?

First of all, the classification of football in which you play is practically meaningless in Kentucky. For instance, according to the MaxPreps logarithm employed to rank the Kentucky high school football teams with-in our commonwealth (top to bottom), Boyle County, whom lost in the semis to the State Runner-up, Corbin, ranked 13th among Kentucky’s 222 high school football teams, interspersed among the 6 existing classifications. Louisville Central, 2018’s State Champion in 3A (also moving to 4A in 2019) ranked 11th and the Class 4A football champion, in 2018, Franklin-Simpson ranked 6th. Class 1A State Football Champion, Beechwood, ranked 15th, and the Class 2A Football Champion, Christian Academy-Louisville, ranked 4th.

What we believe this illustrates is there is no reason to expect that both Central and Boyle won’t immediately challenge for supremacy in Class 4A. There is no way to be sure of that, graduation and who returns will certainly dictate much of the program’s optimism. However, what we know is, with “Shake and Bake” around for another year, Boyle County will be a difficult offense to contain regardless the size of the high school charged with undertaking the chore. In the end, class 4A may ultimately find it prefers being fried.