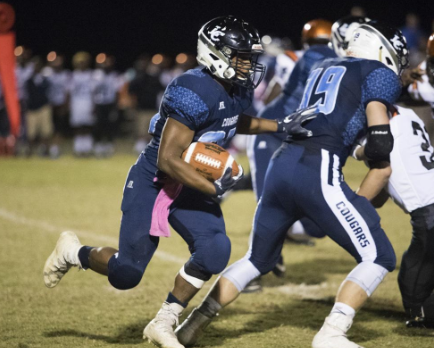 Describing Gary Hardy as a “little-anything” seems inapropos, if we’re being honest. His performances in the backfield for Logan County, over his 3-year career, hasn’t been “little.” His production has been anything but “little.”

Now, if you look at the player profile of Gary Hardy on MaxPreps.com, what you will see is he lists MLB as his secondary, defensive deployment for the Cougars. With his value to the offensive side of the ball, having him play any defense at all is somewhat risky. In 2018, he registered only 9 tackles so Coach Adler must agree.

However, all of that aside, Hardy plays RB with a MLB’s mentality and angry disposition. He is a true, down-hiller, which makes the 5-6, 170 pounder effective between the tackles, squaring up defenders and planting them where the sun seldom shines. There’s plenty of highlights of him doing just that.

That aspect right there, the “down-hill” mentality, the MLB’s disposition, is what makes Gary Hardy “special.” It is what makes him, in KPGFootball’s opinion, one of the most prolific returning backfield weapons in all of western-Kentucky.

Hardy gained 1,261 rushing yards, on 205 carries (6.15 yards per attempt) with 9 rushing TDs in 2017 while also garnering KPGFootball, Sophomore, All-State honors along the way. As a freshman, Hardy contributed 472 yards from scrimmage, on 85 attempts (5.55 yards per carry), and 2 rushing TDs.

For his three-year career at Logan County, Hardy has gained 3,216 yards rushing, on 465 attempts (6.92 yards per carry), with 29 TDs scored for the Cougars via land. Barring injury, there is no reason (we can fathom) why he won’t end his HS career in the neighborhood of both 5,000 rushing-yards with 50 or so rushing TDs before his days toting the pill for Coach Adler are done. That would be rarified air in deed, should it end that way.

Logan County, with Hardy being the principle work-horse for the ground game, has enjoyed unparalleled success the past two seasons in its football program. Consider this, Coach Adler’s charges have won 21 of its 24 most recent contests (11-1 in 2017; 10-2 in 2018).

Caden McKinnis, an All-State, two-way lineman is taking his talents to Division-1 football in the Fall of 2019. Even missing him (which is a huge miss) there appears to be plenty of returning talent on hand. Dynamic playmaker and quarterback, Tyler Ezell (QB) returns as does Zach Yates (KPGFootball All-Stater, 2017-18, LB). Also returning, and expected to take over some of the two-way chores of the departing Third Bell, is Anthony “Rooster” Woodard (WR). All of these returnees, along with Gary Hardy, insure this team will likely remain as formidable as it has been in recent years.

In addition to the return of the above players, and one can never fully discount this, they have two MS, All-State, hulking-linemen coming from out of its very fine MS program. Keyton Jenkins and Isaac Poe are not the type of eighth-graders most programs see matriculate up into its high school.

Keyton Jenkins is just physically way older than his birth-certificate would indicate and is already 5-10 and 245 pounds. Jenkins will play along the interior offensive front for Adler as early as next year (we predict). Isaac Poe, at 6-2 and 260 pounds, should provide some edge protection from either tackle slot in the near future, if not toward the second-half of 2019 on Friday nights.

You have to excuse Logan County if they are seen wearing permanent grins around Russellville, Kentucky when the topic of their football team is broached. You also have to excuse them if their collective chests inflate at the mention of the work-horse of a RB they return in 2019 and what his return means to their prospective fortunes. You see, like we said in the title to this piece, though “little,” Gary Hardy is a freight-train of a ball-carrier. It is a train which has carried the Cougars pretty far already and one Coach Adler appears bent on continuing to ride all the way into the station.