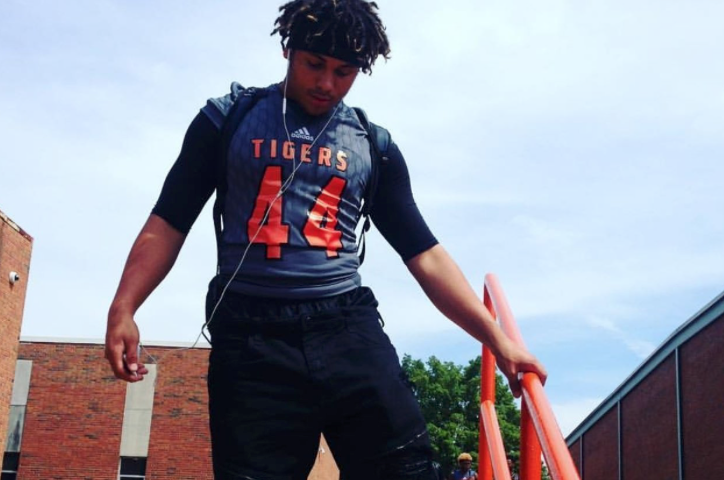 His name is Denarius Barnes. He’s 6-0 tall and weighs around 220 pounds and has just made the AP’s All-State Football team as an “Honorable Mention.” Folks from Hopkinsville to West Memphis, Arkansas, where he played football until moving to the Hopkinsville area for his sophomore season, just call him “Red.”

If Barnes had played his middle school football in Kentucky and played for any of the “Team Kentuckys” on his path from Junior High to Junior year, thereby gaining the notoriety and name recognition which goes along with it, KPGFootball has no doubt Red Barnes would have been much more than “Honorably Mentioned” on this year’s AP All-State Football team. That, in no way, should diminish his being honorably mentioned. Gaining “Honorable Mention” on Kentucky’s (or any other area’s) All-State roster is both a considerable and noteworthy achievement, well worthy of celebration.

Like so many upper-echelon prospects throughout Kentucky’s graduating classes of both 2020 and 2021, Barnes’ power numbers, and even his speed for a prospect his size, are rather eye-popping. First of all, Barnes bench presses 330 pounds and deadlifts, or pulls, 550 pounds. As for his explosion, how does a 275 pound power clean sound to you?

Barnes was timed at the Rivals’ adizero combine last summer at 4.9 seconds over 40 yards. It should be noted the Rivals time was fully-automated. Hand-timed, Barnes’ 40 time would be considerably faster.

Red’s on field production for the Hoptown Tigers this past season, his junior year, just as eye-popping as his strength, power, and explosion numbers. Barnes, playing with his hand in the dirt and badly out-sized by the players blocking him the entire year, had 81 total tackles, 50 of which were solos. Barnes had 9 TFLs (Tackles for Loss) and 4 QB sacks while both forcing and recovering a fumble. He’s no slouch in the classroom either as he has a 3.6 GPA with a date to take the ACT this March.

Now we intimated Red Barnes, who didn’t make this year’s WKC, all-conference team (for reasons this publication just can’t fathom), was somewhat of an “unknown” and that isn’t entirely true. First of all, he’s made the Kentucky New Era, all-area, first team twice (this and last year). Last year, Barnes was selected by our selection committee to our KPGFootball Sophomore All-State squad.

KPGFootball publishes the only All-State football teams focusing on the play of underclassmen in Kentucky, either now or ever. In fact, the AP’s All-State Football team, honorable mentions included, awarded All-State selection to 19 either present or former KPGFootball All-State freshman or sophomore players. It would appear to us, not to ring our own bell, that we must be getting it right, if you will. Well, anyway, you know what is said about one’s ringing his own bell…if one fails to do it, the bell shall goeth un-rung!

In conclusion, KPGFootball wouldn’t have been surprised to see Denarius Barnes awarded “First Team” selection. We guarantee you there aren’t many defensive linemen, on either the first or second teams, any more accomplished or productive on the field. There aren’t many defensive linemen, anywhere in Kentucky, who can truthfully boast of equaling his prodigious and impressive power, strength, speed, and explosion numbers either.

When you see Denarius, go up and talk with him. You will be impressed by his poise, infected by his good-natured personality, and, oh yeah, before we forget…just call him “Red.”