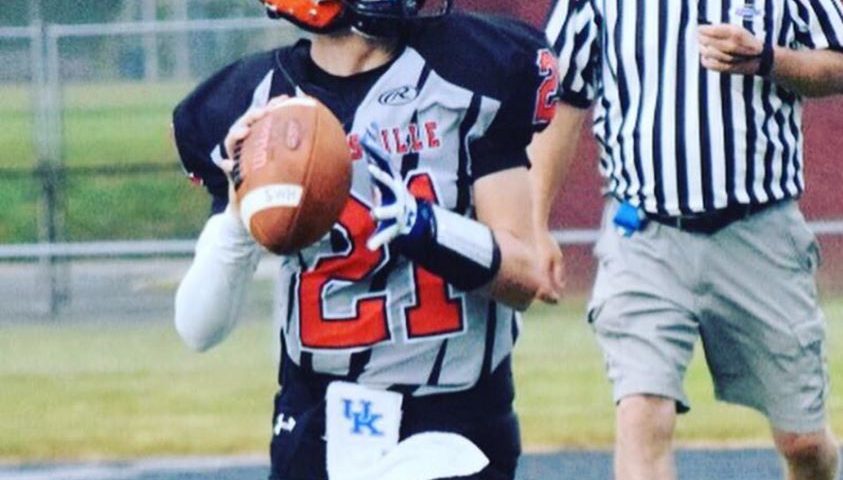 Right off the bat we want to apologize for not having a more recent photograph of Andrew Nason. Nason formerly attended the Hopkinsville Middle School where he played football and starred on both sides of the line of scrimmage at safety and QB.

Nason is a kid who was 5-10 over a year ago and may well be even taller now. He has a long neck, narrow at the shoulders, with long arms and legs indicating to us he isn’t close to done growing.

We listed him among the top-10 prospects in the Class of 2024. We were rating him as a safety. Our enthusiasm about him as a prospect in that class hasn’t dampened any.

Since that time, he has undergone about as fine of QB instruction as one can experience. He has developed a quick release, a high release point, and enough arm strength to “frozen-rope-it” about anywhere you want it put.

He has worked himself up the QB, commonwealth-wide list of ’24 signal-callers. We are confident he is one of his graduating class’ finest prospects on either side of the football. Nason really turned some of the UK coaching staff’s heads at their instructional camp last-summer. The word out of Lexington that day was it was getting real at Kroger Field!

Woodford County is getting a plug-in kid in the back-four, particularly if they deploy him at free-safety. This is a kid who has been running cones, agility drills, 40s, shuttles, and the like since he was in elementary school. He has the feet, hips, length, IQ, “quick-twitch” muscle fiber, and plenty of speed to play high school, varsity football early.

One can’t really ever predict a kid starting at the Class 5A level from night-one, snap-one. However, sometime over the course of his freshman season, he will be called up to the varsity squad and we expect he will be in the rotation in the back-four by playoff time. He will be a night-one, snap-one starter as a sophomore and that may include at safety AND QB.

Obviously this is a blow going forward for the Hoptown Tigers. Maintaining a level of success in high school football is dependent on getting the program’s talent to matriculate onto the varsity roster from off of the JV, Freshman, and MS squads.

QB Bryce Patterson, who threw for over a thousand yards and nine TDs in 2019 as only a sophomore, returns, and will be a junior. This would make Nason the “heir-apparent,” at that position, with an opportunity to get 2nd-team reps early.

The Jackets top-two receivers Brasely Gill and Skyelar Johnson have both graduated. Nason, who easily has the athleticism and skill-set to play receiver in addition to safety, could find some early PT at receiver. Playing receiver is excellent QB-of-the-future training.

This is a win-win for all parties. Woodford County gets a polished and well-trained football player entering the 9th-grade who will meaningfully contribute to its fortunes going forward immediately. Nason gets an opportunity to see the field early and play football for a fine coach (Dennis Johnson) in a classification which affords him the opportunity to hone his skills against top-flight competition.

The Seventh-District might do well to take at look at this particular enrollee. The new bully on the block may not be here, yet; but he appears well on the way.