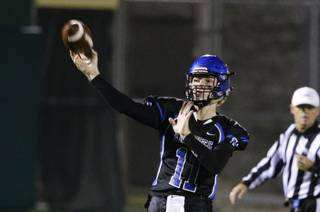 Beau Allen from Lexington Catholic has blasted off like a rocket since our selecting both Reed Lanter and him to be our KPGFootball, Sophomore, All-State QBs concluding the 2017 season. Forecasting Beau Allen was going to “tear it up” at the QB position was as difficult as determining King Kong might well inflict some property damage on New York City if not recaptured and carried back to the remote island from where he was originally taken. It was literally that easy.

Allen has not disappointed us at all either. Beau, whose junior highlights appear here, had a tremendous season in 2018 in route to making numerous coaches and/or media All-State teams at season’s end.

Beau Allen is listed by Rivals.com as a 5.8 rated-four-star QB who is the 15th highest rated pro-style QB in the country and the 4th overall prospect in Kentucky’s 2020 class according to that particular service. Last year, he led his team in passing, as one would expect of a pro-style stud; but led his team in rushing too. Apparently pro-style is incorporating quite a bit more scrambling these days than in the past.

While Allen appears headed to play for the hometown Wildcats (pretty-please), he has opportunities at Duke, WVU, Bowling Green, Cincinnati, Maryland, Washington State, Wisconsin, and several other FBS-programs. That Duke offer stands out, to this publication, as there may not be a better predictor of future college football stardom, especially at the QB-position, in all of college football than David Cutcliffe, the head man at Duke University.

The 6-2, 200-pound, seemingly (at times) one-man band completed 233 of his 357 passing attempts in 2018, for 3,729 yards passing in 12 football games with 42 passing TDs against only 9 interceptions. Allen carried the football 99 times, from the QB-slot, gaining 740 yards while carrying it over the goal-line 8 times. In case any of you are math-deficient, we have done the math for you. Allen completed over-65% of his passing-attempts (.65266106) in his twelve games of action.

His average game looked like this…19 for 30, for 311 yards passing, with 3.5 TDs. One may add that to his per-game average of 8 carries for 62 yards and 2/3rds of a rushing TD per contest. What remains is often referenced as a scouting-report-nightmare of a high school QB.

So, Lexington Catholic is poised to move up to Class 4A football and make a run for the title there. Catholic was 8-4 in its last year in Class 3A and, as discussed on this site many times, moving up a classification, in Kentucky, doesn’t necessarily mean the teams you will encounter will be any tougher than what you have been playing.

So, how will Catholic do? Well, they have Beau Allen and, as discussed above, that’s having quite a lot. However, Catholic has lost quite a bit of playmakers from off the 2018 roster who will be matriculating to college before Catholic tees it up in the Fall of 2019.

The leading returning receiver for Catholic will be Class of 2021, Jackson Corbett who caught 27 footballs as a sophomore for 450 yards and 5 TDs. He will be joined by a combo WR-DB in Dylan Bracken, also a Class of 2021er, who caught 7 footballs for 221 yards and 3 TDs with 2 interceptions contributed while on defense to tie for the team-lead in that category.

In the ground game, steady Ryan Nichols, the team’s second leading rusher, behind Allen in 2018, returns for his senior year but the third leading ground-gainer, Keith Brinkman, walks the graduation platform at the end of this semester with many others. To add insult to injury, in a loss which can never be fully comprehended by anyone other than devout football aficionados, Catholic loses a reliable P-PK to graduation. Trey Woody scored 68-points for Catholic a year ago on 6 made FGs and 50 PATs.

Catholic’s four leading tacklers have exhausted their eligibilities. Brennan Emnett (115 tackles), Clay Callanhan (97 tackles), Henry Holthaus (74 tackles) and Chandler Caudill (58 tackles) are all out of eligibility and won’t be back in 2019. As for the back-end, particularly regarding interceptions, a pair of sophomores, with 2-picks a piece in 2018, return in John Simms and Dylan Bracken. Every other DB with a pick graduates (Schnurr 2, Holthaus 2, Emnett 2, Luke Powell 1).

So Catholic is moving up to play in Kentucky’s Class-4A in 2019. They are losing a staggering amount of production the likes of which few teams could either easily or successfully withstand. Yet, everything both seems and is alright in Lexington, Kentucky at its prestigious Catholic high school. No-one around the program appears the least bit anxious.

Perhaps there’s talent abound on the varsity roster for whom these seniors just needed to get out of the way permitting them to have their time in the sun. Maybe it’s simply because Beau Allen returns. We mean, after all, what more does one really need to field a championship-caliber, high-school football team?