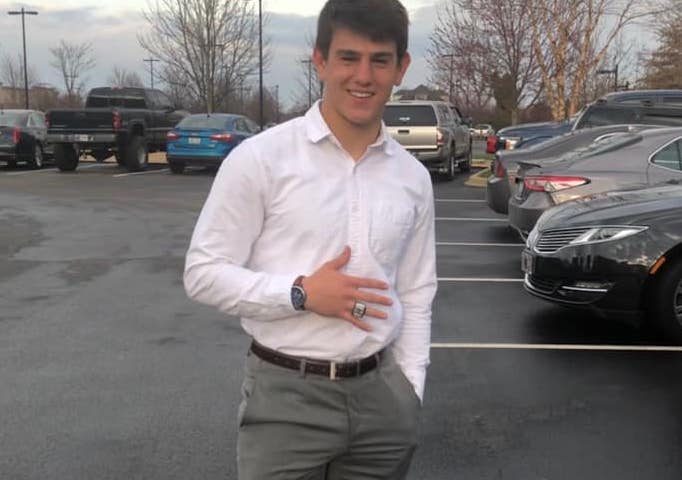 Some of you will undoubtedly recognize the movie-star good-looks, easy smile, immaculate dress, and slightly wind-blown but still, somehow, impeccable coiffeur of Team Kentucky’s Nick Coates. When he played for Team Kentucky Future Stars we used to call him The Jet owing to his breaking every stereotype conceivable for running speed of white receivers. Nick Coates was then, and we believe him still to be, one of the fastest players in his graduating class.

We concede he looks more like a model for Gentlemen’s Quarterly than what one may expect from a football player. However, don’t be the least bit deceived, he is one-Hell of a football player. If he takes off for Louisville Male in 2019 like we believe, there are going to be coaches and media all over the commonwealth familiar with Nick Coates.

College football players should start revealing themselves on any (and we mean any) roster sometime during his sophomore year. KPGFootball has said, many times, the inability to crack the lineup as a sophomore is “brought-up” by recruiters as a point of curiosity when discussing prospects. It wouldn’t be perpetually inquired into if it wasn’t, at least in their minds, a thing.

Well, Coates came out of preseason camp at mighty-Louisville Male, one of Kentucky’s premier Class 6A programs, running with the “ones” at corner-back. His track to sophomore super-stardom was derailed, somewhat, when he broke his ankle in the second game of the season. That aside, he went into the season having earned, in preseason camp, the starting slot at corner as a sophomore. Therefore, any talk which inserts him into the conversation concerning the best rising-juniors who play in the “back-four” on defense in Kentucky is both warranted and entirely legitimate.

Coates was one of the best overall athletes in his class when playing for Team Kentucky and, now that his class is entering its junior season in 2019, nothing has really changed. Coates is a star on the Louisville Male track & field team as both a long jumper and leg of Male’s 4 X 100-meter, State-Champion (2017), relay.

Had a friend one time who said the sine qua non of athleticism was the ability to both run and jump. You may not be familiar with the doctrine of sine qua non which literally means without which, not but actually stands for the proposition that, without (something), (something else) wouldn’t be possible. So, my friend believed people who lacked the ability to both run and jump well couldn’t possibly be athletes because of the lack of the two described physical traits.

KPGFootball is not willing to go that far; but we will concede both running and jumping are strongly indicative of athleticism, maybe not singularly, but certainly strong indicators. By any measure, Nick Coates is one hell of an athlete and his return to the lineup to next year’s Bulldog squad is one about which Male has every right to be exuberant.

So where does Coates fit in the lineup for 2019? Well, he’s a nightmare match-up working the middle-zone against linebackers or safeties should he work from the slot. He’s an edge threat too with his quickness, spacial athleticism, explosiveness, and separation-speed. Obviously, Male likes him at corner, and what’s not to like about a kid, that dynamic as an athlete, and still carrying a GPA north of 3.5 on a 4-point scale. We have even heard from our sources his ability to tackle in space coupled with his physicality makes him a threat to move to either of the safety positions.

The important lesson here is one shouldn’t be the least bit fooled by Nick Coates’ clean-cut good looks, or his fraternity-chapter President charm and wit. Why? Well, because this guy will knock your damn socks clean off your feet.

In our estimation, he is one of the more intriguing football, back-four prospects in all of Kentucky’s Class of 2021. You know what else Coates is? He’s just one more reason why Male may be a threat to repeat as Class 6A Football State-Champions in 2019.