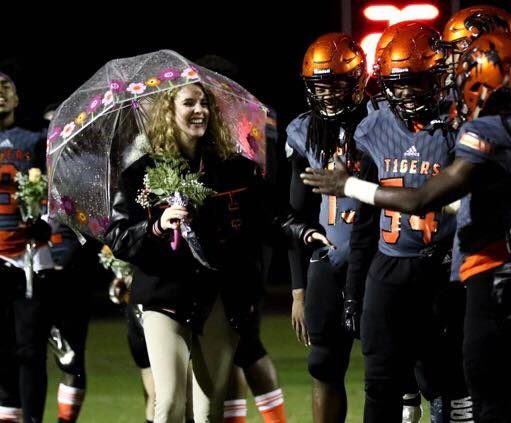 While we are going through and featuring our Freshman and Sophomore All-State Football players, we thought we would take a moment to feature the unsung heroes of High School Football. That would be the Managers. We would like to salute the young men and women who, without the slightest fanfare or even recognition, selflessly give of their time and talents to support, comfort, nourish, and treat the young men who take the field for us on Friday nights, the same young men whom fight to the bitter end for the honor of our respective alma maters. Through this article about Caroline Long, we really salute the Skylar Rays (featured photo), the Carter Pollards, the Nick Lodges, the TT Millers, the Zharia Mannings, and the scores of other managers, unknown to us at KPGFootball, but whom we honor today, nonetheless.

Caroline Long, above depicted, would have every reason to dislike football. I mean, when your brother garners the attention he does, as someone whom has been significantly honored throughout his football career to date, why wouldn’t one naturally expect the sister to gravitate to any pursuit but football. Instead, she has ensured and insisted her brother doesn’t run onto a football field, anywhere, without his sister there to care for him. From providing water, to taping extremities, to helping with pre-game meals, and post game snacks, Caroline has been on a football sideline basically since she could walk. She has been a cheerleader from Junior Pro through middle school but has found her calling as a Manager/Trainer, which she has done in Junior Pro, 6th, 7th, 8th, and now 9th grade.

At Hopkinsville High School, we have watched Caroline, and her colleagues, care for our injured, scold the unruly, uplift the down trodden, and love each and every player committed to their care. Caroline’s duties have grown, each year, under the tutelage of Benny Butler, who may be the best Medical Trainer in the business of high school football and one even opposing trainers gravitate toward in the hopes of learning a little something. Caroline has had excellent footsteps in which to follow in experienced and skillful trainers like Skylar Ray and Carter Pollard and she has demonstrated a devotion to her craft and a love for what she is doing. She knows it is imperative, and so do both the coaching staff and players who benefit so richly from her efforts.

Perhaps the best story one can relate about Caroline came from this past Senior Night at Hopkinsville High School. She was standing on the sidelines, thankful for the heavy down pour which camouflaged the tears streaking down her face. I asked her if she was going to be alright.

From her heartfelt emotion, there really couldn’t be a doubt. She loved every one of them, unconditionally, just as she found them, warts and all…as does Skylar, as does Carter, as does TT, as does Zharia, as does Nick, and so on. As the son of a doctor, my father taught me, from early on, that the most important part of patient care, the most healing of all medicine, is the patient’s feeling the caregiver’s love and genuine concern. This is often referenced, among various practitioners of the healing arts, as bed-side manner. A compassionate touch, coupled with the words, You’re going to be alright, are still, and forever will be, the most potent of medicines for which no drug, ever conceived, fashioned, or yet to be contemplated, will ever be able to fully replace.

We salute today the managers and trainers across Kentucky who love, support, care for, and treat all of the football players out there who benefit, so richly, from their efforts. Reporting for KPGFootball, this is Fletcher Long…