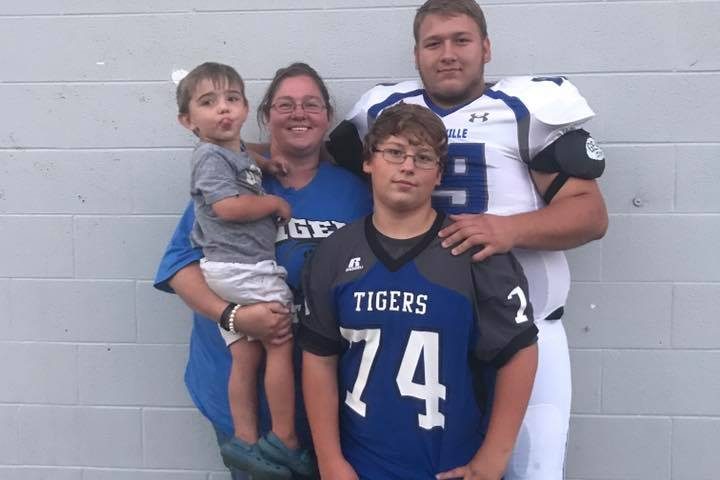 Hunter Ousley is a name with which any high school football fan should be well familiar. We have covered this man since he was in 7th grade and he looked very similar to how he presently appears, like a full grown man even then.

Ousley flies under the radar a bit, playing guard and tackle on offense and anywhere from NG to DE along the Tigers’ defensive front. However, any good football coach (like Joe Chirico) would tell you the ability to contend for championships both begins and ends with how many Hunter Ousley-types you have on your roster.

Hunter Ousley is what we call at KPGFootball all-over huge. What that simply means is his wrists, ankles, neck, head, and heck, even his fingers are all mammoth.

KPGFootball has heard football coaches say about bigs, a.k.a. linemen, that mass is mass. What that simply means is coaches can’t coach a kid into having mass. Mass, or size, on a lineman along either the offensive or defensive front has to be accounted for and taken into the equation when deciding how to deal with that particular player. It’s just there and it isn’t going anywhere unless you move it and moving it is the rub, isn’t it?

Well Ousley is 6-1 or so in height and his weight is mysteriously absent from any Paintsville roster we could find. We checked MaxPreps, the Riehards-KHSAA site, and Hudl, and we couldn’t find his weight anywhere. Ousley weighed 335-pounds when he played nose-guard for Team Kentucky FBU Elite in 7th grade. We don’t believe he’s been on any type of diet.

It really doesn’t matter what Ousley weighs because he isn’t sloppy, he really isn’t fat. This is a kid with the arms of a lumberjack who has the density of a planet. We aren’t sure you can triple-team him and dig him out of a hole. We aren’t sure moving him is humanly possible.

Over the course of his sophomore season, Ousley played quite well considering he gets mainly deployed defensively at a slot which draws a double-team nearly every single snap, and that’s when the nose isn’t Hunter Ousley. He had 39 tackles in 2018 with 30 of those being solo over the 12-games in which he played.

Hunter is a kid who moves much better than you would expect, as evidenced by his being stationed at guard on offense and able to play along the defensive front at end. He has good core strength and hip level and is able to play with really good leverage. Just a little pointer here, if you fail to get up under his pad-level, you are really in deep, deep trouble.

Ousley both quietly and without much fanfare, goes about his business and does his job. He’s a fine young man for whom family is important. Conversely, football is important to the Ousleys. They are definitely in this thing together as the featured picture to this article clearly demonstrates.

We believe at KPGFootball Hunter Ousely is among the very best HS nose guards in Kentucky in his class or any other for that matter. We believe he will have a break-out year for Coach Chirico’s Tigers and will play on Saturdays on a lucky school’s dime. Ousley is mobile, strong, powerful, explosive and has tremendous mass.

Moving Hunter Ousley is like uprooting a California Redwood. For all of those teams planning to run up the middle in the Paintsville game in the Fall of 2019, all we can say is good luck with that!

Reporting for KPGFootball, this is F.W. Long reminding all of the ballers out there that #WeGotUCovered and to PLAY THROUGH THE WHISTLE.