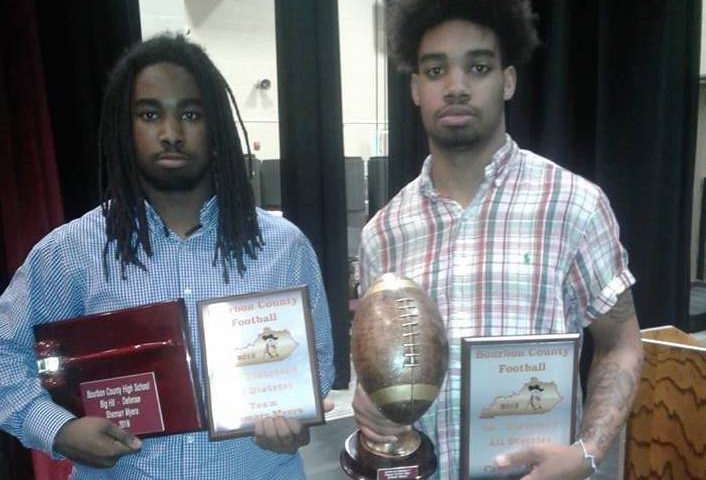 We have a friend in the coaching business who has become close to us at KPGFootball. We call him occasionally to inquire about players. When he believes the particular player about whom we are inquiring is a bad hombre, he will say, Let me say it this way, he ain’t nothing to be played with. As we researched this article for purposes of publishing it, we could just hear our friend saying that the more we learned of our subject. He’s from a football playing family too.

At KPGFootball, we are sure there are times when being CaMarr Myers little brother wasn’t a lot of fun. We mean, we all know how siblings can be. In the end, they are cheering for the other; but, you know how sibling rivalry works.

As an example, KPGFootball is sure CaMarr got tired of hearing about SheMarr when he made the middle-school football All-American team. We are sure there was some good-natured ribbing along the lines of we can’t wait for the good-Myers to get up here to the varsity team. We are sure this was said by people around the Paris, Kentucky program who were somewhat adept at sticking the needle in, just a bit, without going too deep to make the psychological damage irreparable.

CaMarr went out last year and was everything for a Colonel squad which suffered on the year in spite of CaMarr’s efforts. CaMarr’s efforts, by the way, were considerable.

Defensively, CaMarr led the team in tackles with 64, had 2 TFLs, forced 3 fumbles, and intercepted a football he returned 75 yards. You can’t tell KPGFootball there wasn’t some sibling rivalry ignited when the Kentucky Football Coaches Association awarded CaMarr the Class 4A, District 7, Player of the Year Award. We have a brother; and we know these things.

Then again, it isn’t like SheMarr was over on the sideline crocheting a sweater. SheMarr played offensive guard. He was along the front charged with blocking for CaMarr and his backfield mates. We are sure he would be quick to remind KPGFootball just who opened the holes from which CaMarr derived statistical benefit.

Defensively, SheMarr, who has grown to 6-0 and is listed around 250 pounds (yeah, right), recorded 44 tackles playing along the D-Line, registered 2 QB sacks and 6 TFLs, over his junior year. His production along the defensive-front for the Colonels in 2018 wasn’t near what we believe it will be in 2019, but it was comparatively stellar, in light of the team’s production, nonetheless.

So CaMarr is moving on to greener pastures as they say and Wilmington College out of Ohio is set to host the 6-1, 190-pounder this coming weekend. We aren’t sure exactly where those greener pastures may, ultimately, lie; either at Wilmington or somewhere else, but there will be pastures happy to let CaMarr Myers graze. This conclusion appears appropriate, based on his on-field production, if for no other reason.

Fear not Colonel fans, it’s not like you are out of players around the Paris, Kentucky high school. Heck, you aren’t even out of kids named Myers.

SheMarr looks to KPGFootball to be poised to completely fulfill the promise he represented coming out of middle school. SheMarr is a Class of 2020 prospect who has played well over the course of his high school career, to date; but, if the early tea leaves tell us anything, together with his gains made in the offseason strength program, we really ain’t seen nothing yet when it comes to SheMarr’s play, with apologies to Bachman-Turner Overdrive.

The OL-DL combo athlete, like his brother CaMarr, is fast, particularly for his size. SheMarr has been clocked under 5.0 in the 40 yard dash. He’s registered a 4.97 to be exact. He’s also a 285-pound bench presser who will easily hit three-plates or so (315) before the ball is kicked-off in 2019.

Folks around the Colonel program are excited with the new coaching regime and they should be. Coach Dave Jones has brought with him some exciting coaches like Vincent Sweet-Pea Burns under whose tutelage Myers appears poised to really flourish. There will be some of the old guard around to make the transition as seamless and smooth as it can be.