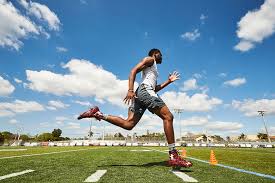 Yesterday, January 4, 2021, was a day which will determine your favorite team’s fortunes going forward into the Fall. Many won’t realize this, but the champions in all 6-classifications of Kentucky High School football are being built now.

You can’t just show up in August and say, “Alright, I am ready to play.” Well, we suppose you can, but neither your team nor you will perform very well if enough players elect to do this.

The players who go on to star, put in the effort offseason to insure in-season success. The offseason is where you learn who your next stars will be. It is why we have covered it.

Football is a year-round undertaking, depending on what level you wish to perform. Team’s who don’t do much offseason, reveal themselves particularly late in the following regular season.

Right now the top programs will be trying to add strength, power, and explosion. Later on in the offseason, you will see speed and quickness training added in with the lifting.

Now too many kids focus on straight-line speed (40-yard dash). Don’t forget colleges want to see your change-of-direction speed and explosion too (L-cone drill, Pro-agility shuttle). It is as important, if not more so.

Offseason has several fun opportunities for football players. Sevens (7 on 7) leagues will kick up for the skills. There will be “Big Man Challenges” hosted at many of the Sevens tournaments.

College programs will host prospect camps. Of course, should it get held, the Kentucky High School Powerlifting Championships usually come off in March. If you have never watched a powerlifting meet, we suggest you give it a gander. It really is exciting and a fun watch.

There are lots of offseason training opportunities with trainers who specialize in both position training and football related skill development. Areas where there aren’t “trainers” specializing in such development, the high-school has a coach assigned or available for such training.

Signing up your son for some offseason, supervised, skill development, and absorbing the cost for the same, is a fine thing to do and something you should consider. His development is an investment which can pay off mightily for the both of you in the not-too-distant future.

In any event, KPGFootball will continue its football-only coverage throughout the offseason. We will cover combines, publicize weight-room and powerlifting meet accomplishments, cover 7 on 7’s and “Big Man Challenges,” and cover college prospect camps, as we have done every other year.

We generally get as much or more subscriptions in the offseason than in-season. We’ll have this action for you too. After all, it is the goings-on, right now, which will lead to championships in the Fall.