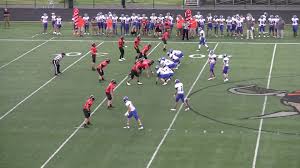 Sometimes the enormity of the job we have taken on gets cumbersome and down-right intimidating. Trying to cover the entirety of Kentucky and recognize its many star, high-school, football players can leave anyone awestruck.

There are way more talented football players playing in Kentucky than people even realize. The commonwealth is a rich, vein of talented, capable players waiting to be capably mined by programs at every level of competition.

If you watched television this bowl season, and saw all the Kentucky kids showing out at the many programs represented where they play college football; you had to have come away with the same thought as we. Man, when a school takes a chance on a Kentucky kid, that school sure gets rewarded with excellent play from an excellent college player.

Wilson Pendleton, a class of 2021 prospect, is a football player. He plays football for a historically tough, Class 6A football program in the Ryle Raiders. He’s got it all…explosion, length, football IQ, quickness, speed…just the whole package.

Pendleton is 6-3, weighs 230-pounds, and played in high school from DT to DE along the Ryle front. He figures to play end in college, though his beefing up some and sliding inside wouldn’t be out of the question. With a 3.944 GPA and a 28 on the ACT, he has the grades to get a ton of financial academic aid at any level of football he should choose. The world is literally his oyster.

Last year for the Raiders, Pendleton had 69-tackles, 12-TFLs, 8-QB sacks, and forced a pair of fumbles. The 20 defensive plays in the offensive backfield tells me he is aggressive and certainly not getting driven back into the defense’s second level. His forcing fumbles tells me when he arrives at the ball-carrier, he’s in a foul mood.

The Raiders, like so many high school teams in Kentucky, had an interesting COVID-plagued year. The perennial 6A football power came out the gate 1-3. Then the Raiders won five straight to garner a 1-seed in the district round-one game against 4th-seeded Dixie Heights.

Dixie Heights upset Ryle in the second-round (Ryle had a round-one bye). Upsets this postseason were something we saw more of this year than any previous one.