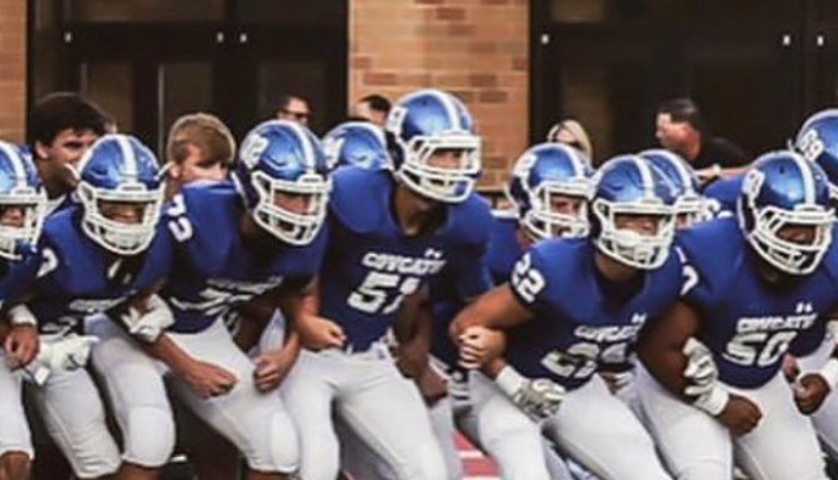 Logan County’s Wyatt Blake (2022) carried it 27 times against Hopkinsville High for 250-yards and 2 TDs. Logan won 31-7. Zach Yates (2021) for Logan County had 8-tackles, 3-TFLs, 2-QB sacks, and an interception. Yates maybe among the top 3-5 all-around football players in the 2021 class and some lucky college would be very wise to get to Russellville, tout de suite, and offer this kid. Anthony “Rooster” Woodard (2021) picked off 2-passes and returned them 46-yards.

Breathitt County’s super-frosh receiver, Austin Sperry, had another big game for the Bobcats. The Class of 2024 prospect caught 4-passes for 107-receiving yards with one going for a TD. On the year, the freshman, in four-games, has snared 19-receptions for 413-yards in receptions and has caught 5-TD passes. Now that folks, especially for a freshman, is playing. QB, Jaylen Turner (Class of 2022) had a big night too, at least in passing yards. Tuner completed 11 of 25 attempts for 251-yards and two TD-passes. The Bobcats won a thriller over visiting Greenup County, 26-19.

Union County’s, Corithian Seales-Portee (2021), had a tremendous game last night in Union County’s 41-7 beat-down of Paducah Tilghman to gain its first win of the 2020 season. Seales-Portee carried the ball against the “Blue Tornado” 29-times and gained 219-yards rushing with 3-rushing TDs.

Matt Anderson had an incredible performance for Pike County Central against Magoffin County. The 2023 RB prospect gained 409-yards from scrimmage on 30 carries, nine (9) of which he carried across the goal line for scores.

The nine TDs are a new KHSAA record, breaking a mark which had been shared by three players (for TDs in one game). The old mark was eight (8). Anderson now sits alone atop the all time TDs in one game statistical category.

Anderson, a member of the KPGFootball Freshman All-State team a year ago, has gained 1,075 yards over his 6-games and has scored 16-rushing TDs on the year. Pike County Central won the game 82-52 and are 3-3 heading into a date with Belfry this coming Friday night. There has to be something in the water in Pike County as this is the second Kentucky record which has fallen this season for single game performance.

Talk about efficiency, how about the football game Cameron Hergott (2021) had for Beechwood against Lloyd Memorial Friday night? Hrergott was 13 for 15 for 221-yards and 3-passing TDs. He ran only three times but gained 21-yards and scored a 4th TD. Nicholas Stecht (2021) had a pair of QB-sacks for the defense and both Tanner Schultz (2021) and Mitchell Berger (2023) picked off passes. Beechwood throttled Lloyd memorial 49-0 to run its record to 4-2 on the year.

Leslie County’s Trent Asher suffered a broken collar bone in the game with Knott County Central Friday night and maybe lost for the balance of the year. If Friday night was his last as an Eagle, he went out on a bang. Asher had 16-rushing attempts for 114-yards and a score to go along with an interception on defense. QB, Zack Parker was the very picture of efficient in the game too. Parker completed 7 of 11 passing attempts for 139-yards and 2-scores. Most importantly, Parker and Asher helped lead the Eagles to a 32-14 win over its district rival to move its record to 2-3 on the year.

Anthony Johns (2022) for LCA is the best interior offensive lineman in the ’22 class. On the biggest night of the year (regular season) in the 2A classification, it should be no surprise he helped anchor a line which punished the Somerset front-seven for 450-all purpose yards (111-rushing, 339 passing) with 4-TDs (2 rushing, 2 passing).

All of that is impressive for Johns and his line-mates standing alone. However, Drew plays defense too, along the interior front, where players are constantly and consistently doubled, and even, tripled teamed.

That notwithstanding, Johns still recored 4-tackles, a critical TFL on a crucial late down play around the goal line which took Somerset out of FG range in a tight ball game. Johns also recovered a big momentum swinging fumble. Mattie Lebryk (2021) had a huge game defensively, for LCA, with 16-tackles, 2.5 TFLs, and 2-sacks. Freshman DB, Parker Chaney (2024) picked off the football twice on the evening. LCA beat Somerset at Somerset 28-21.

West Carter suffered its first defeat of the season on the road at Paintsivlle Saturday night. The game was just a two-point spread late in the contest and ballooned to the final margin of 34-12. Leetavious Cline had a fine night, in spite of the loss, eclipsing the 100-yard mark, with 103 tough yards on 28-carries, while scoring one rushing TD. On the year, Cline has gained 1,094-yards in 106-carries, with 18-rushing TDs. Gavin Gipson had 11-tackles with a TFL to lead the defense. We also hear he has a 35 on his ACT and headed to Centre College to play football at the next level. That is a huge pickup for the Colonels for the ’21 class if what we have been told is reliable information. Congratulations to Gavin and the Centre football program.