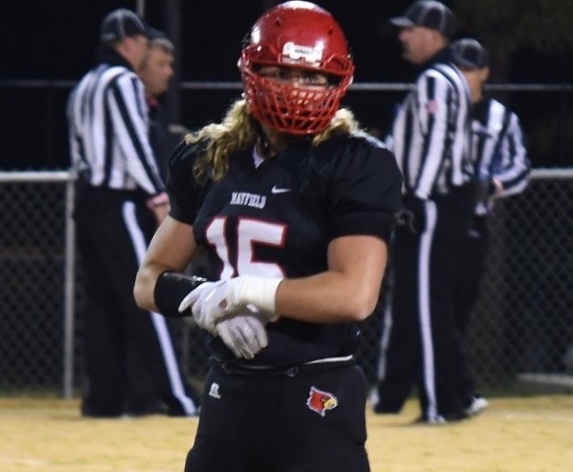 As KPGFootball continues to feature local, area players whom made the AP All-State Football team, we come to a player from Mayfield High School whom this publication was proud to recommend for Team Kentucky’s roster at this year’s “Border Bowl.” The “Border Bowl” was played just this past weekend and Team Kentucky prevailed over Team NC, 50-0.

KPGFootball is also fiercely proud to have both nominated and voted for Smith’s inclusion on this year’s AP, All-State Football team. What can we say? KPGFootball knows a football player when we see one.

Brian Tracy once said we should decide what we want, and then act as if it were impossible to fail. Brian Tracy, a Canadian-American motivational public speaker and self-development author of some seventy books which have been translated into dozens of languages, will never realize just how aptly he described Mayfield’s Brady Smith.

In talking with people around Mayfield, it was related to KPGFootball that Brady Smith has just always sort of known he would play college football. KPGFootball has seen him play numerous times and we know him to be both an incredible player and one of Kentucky High School football’s more recognizable athletes.

Smith, known for the locks of hair flowing from underneath the “Cardinal” colored helmet, almost as much as his un-deterrable charge from off the Cardinal defensive end, made the “Courier-Journal’s” (Coach’s) 3rd team, All-State Football squad as both a junior and senior and made the AP’s (Media’s) 2nd Team in this, his senior year. At the end of the day, Smith, holding 7 college offers to continue both his athletic and academic matriculation, settled on South East Missouri State University.

In getting Smith, the “Red Hawks” from Cape Girardeau, Missouri are getting a 6-3 and 221 pound DE who arrives “college ready” in that he will come on campus able to contribute immediately. Brady is super quick off the edge with good core strength enabling his playing with excellent leverage and bend. Smith can dip and get under the tackle’s hands, quick-twitching his way into the backfield before the tackle has much of a shot at blocking him with the power and explosion to come both under and through an offensive tackle, driving him deep into the offensive backfield.

At Mayfield, Brady played in the State Championship game three times, winning one. There are plenty of places where that is an admirable level of success to experience over the course of a high school playing career. Mayfield is NOT one of those places as results of that nature are expected, and not particularly celebrated, in the Mayfield football program.

Brady Smith’s Mayfield team went 14-1 in 2018. Mayfield lost to the Christian Academy-Louisville in the Class 2A, State Football Championship at Kroger Field, 36-24.

It is difficult to forecast the impact losing No. 15’s furious charge off the edge of the Cardinal defense will have in 2019. There was Mayfield football before Brady Smith and there will be Mayfield football when he’s displaying his abilities in Missouri. There is one thing KPGFootball can confidently predict and that is we won’t see his equal, at the DE position, on a Western Kentucky high school football roster too terribly often.

As Brian Tracy recommended, Brady Smith wanted to be among Kentucky’s finest high school football players. After making that decision, he set about making it happen by acting, training, and playing the game as if failure wasn’t an option.