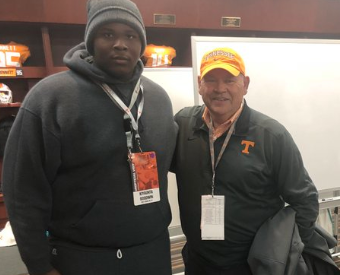 He’s Kentucky’s largest protection against the outside edge rush in high school football. He’s one of the Class of 2022’s most coveted prospects anywhere in America.

How large is he? Well, look at the picture to the left. That’s NFL Hall of Famer, Michael Anthony Muñoz, himself 6-6, 280 pounds, pictured with him.

His name is Kiyaunta Goodwin from Louisville, Kentucky and he started his freshman season for Class 1A, Holy Cross High School in Louisville. For those who believed a 6-8, 350-pound Louisville kid, choosing to play competition at Kentucky’s smallest classification with Class 6A powers all around him, was a “cop-out,” you no longer have that complaint in the old quiver of criticisms.

In a move which went largely unnoticed this offseason, but which may be the most significant offseason transfer news in the commonwealth, Kiyaunta Goodwin is listed on the roster for Louisville’s Ballard High School. Ballard High School is coming off an 8-5 record in 2018 and, with the talent dotting its roster already, is widely considered one of the more upwardly spiraling teams in Kentucky’s 6A.

Goodwin has gone from the prospect of having to play teams like Shelby County, Bethlehem, Paris, Kentucky Country Day, Frankfort, Fairdale, and Ludlow to facing DE’s from Male, North Hardin (where his match-up with Octavious Oxendine looms), Christian Academy-Louisville, Trinity, and Scott County. The step up in the quality of edge-rushers he will now be called upon to stifle is staggering.

Still, Goodwin isn’t holding offers from teams the likes of Kentucky, Tennessee, Alabama, LSU, and Georgia for nothing. Kiyaunta has been training with Aspiration Fitness Institute’s Chris Vaughn for years for just this opportunity.

Well, Kiyaunta Goodwin, it’s time son. It is time to showcase your immense talents on Kentucky high school football’s biggest stages and under its brightest lights. It’s time to answer the bell, so to speak.

Have a great year at Ballard and look forward to this opportunity to show the world exactly what you can do. It won’t be the last time we hear of you, that is for sure.