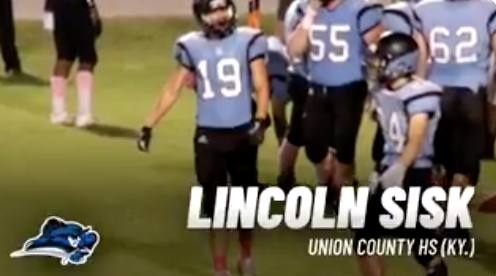 Ever been to Morganfield, Kentucky? It’s a lovely city in Union County named for the Revolutionary War hero, General Daniel Morgan. In reward for his exemplary service to the nation’s fight for independence, General Morgan was awarded a land grant by his now liberated and independent nation. That land grant, or pretty near, is Morganfield, Kentucky. Morganfield is approximately 2.1 square miles of land additionally containing about 0.04 square mile of water.

Do you know who doesn’t like visiting Morganfield, Kentucky. Well, KPGFootball has heard it isn’t a picnic for teams having to play the Union County High School Braves.

Coach Derek Johns had it rolling this year until his Braves lost on the road in LaRue County in round one of the KHSAA, Class 3A, football playoffs. Now, although the game was played in Hodgenville, Kentucky, we don’t mind telling you KPGFootball had Union advancing. We are far from always right. Union County lost 48-29. The reason we liked Union in the match-up? Well, there were a few.

First, Union County had gone into Madisonville, Kentucky and beaten Madisonville North-Hopkins on September 7, 2018, 14-13. That same Maroons team would go 10-3 and narrowly lose to Franklin-Simpson, 12-10, in the Regional Championship game. All Franklin-Simpson did, in 2018, was win the Class 4A, State Football Championship, for the second consecutive year. Bottom line, the Maroons were stout and beating them in Madisonville was very impressive.

Secondly, Union County entered the LaRue game 7-3, with Crittenden County, Caldwell, and Paducah Tilghman being its only losses. LaRue entered that game 5-5 and had been smoked 39-0 by Taylor County, lost to both Lincoln County and an E-Town team which struggled at times in 2018, and lost to Class 1A Campbellsville.

Yeah, I know Campbellsville was a pretty good, 1A, football team going 11-2 in 2018; but, hey, its not like they were Beechwood. Incidentally, Campbellsville lost 48-13 in the Regional Championship Game, so they weren’t even close to being Beechwood.

So we were surprised when LaRue at 5-5 entering the game got past a 7-3, Union County, even though the game was in Hodgenville. Taking the teams’ seasonal body of work coming into the game, we thought the Union County Braves were too much for LaRue. Imagine our surprise when LaRue advanced all the way to the State semi-finals in the 3A classification before losing to State Champion, Central High School (Lou.) 48-8. Suffice it to say we were convinced Union was destined to be a “tough-out” in the 3A playoffs and we expected they would make a run.

One of the reasons we were so sold on the Braves can be attributed to linebacker Lincoln Sisk. Sisk played on both sides of the football for Union County. On offense, Lincoln carried the football 66 times for 328 yards rushing with a rushing TD. Sisk also caught 18 passes for 363 receiving yards and 7 TD receptions. Hell, all the kid did was lead his team in scoring with 66 points even if it did take some defense to lend to the ultimate total. Lincoln’s defensive play lent a scoop and score and two pick-sixes to the 66 points he tallied (1 TD rushing, 7 TD receptions, 1 fumble he scooped up and took into the end zone, and 2 pick-sixes).

It was on defense where Lincoln really starred as he was selected by the coaches to the Western Kentucky Conference’s first team as a linebacker. At his LB post, Lincoln had 79 tackles, 6 TFLs, 5 QB sacks, and (of course) the pick-sixes and scoop and score we have already described. At the end of the day, Sisk’s play was good enough for Lindsey-Wilson to come calling and garner this All-Conference linebacker’s signature.

So, Lincoln Sisk moves on to one of the premier football programs in the NAIA. The Braves are left to pick up the pieces and reload for next season. You can bet on this one thing with only 9 seniors graduating, it doesn’t appear to KPGFootball that visitors to Morganfield, Kentucky are going to be treated much better in 2019 than they were last season. It will still be a very difficult place to have to play. There are other Lincoln Sisk’s around the hallways just looking for an opportunity. The opportunity appears to be now.