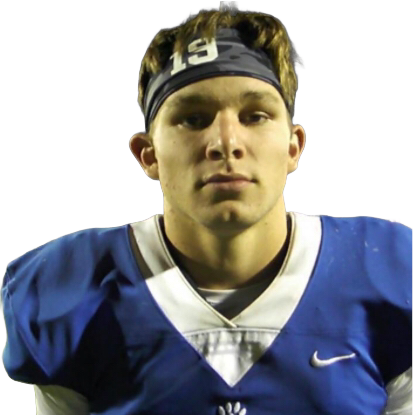 Through the years, particularly in football, we have found the acorn doesn’t fall too far from the tree. Sons of football coaches, particularly great coaches, often fare well playing football.

There are plenty of examples of this. Mayfield’s Joe Morris played for his father, Jack and was an all-stater. Hopkinsville’s Craig Clayton played at Caldwell for his father, Fred. He too was an All-State player.

The John Myers who won 118-games over that expanse of time. The John Myers whose teams’ averaged 8.5 wins a season, played for two regional championships, won its district five-times, and won twice as many games as it lost in spite of his being hired to coach a team which had lost 27 of its 36 games immediately preceding his being hired. You know him.

John Myers is a football coach. John Carter Myers (’22) is a football player with immense value to a college football roster. There are high-quality programs taking tremendous stock in that reality.

Coaches love football players who are versatile and athletic. The younger Myers is a three-sport athlete at Glasgow High, playing baseball and basketball in addition to football.

Football coaches love players who contribute to multiple phases of the “bottom line.” Myers, in helping lead the Scotties to a 9-1 regular season, has completed 25 of 40-passing attempts for close to 500-yards with four thrown TDs to zero thrown interceptions. Myers has gained a couple hundred yards rushing and scored a pair of rushing TDs. Myers has scored four 2-point conversions on the year to lead the team in that statistical category, while leading the defense in both tackles and interceptions.

Myers has scored for his team on the year rushing, receiving, and on special teams scoring 2-pointers while tossing some scores other players’ way in the passing game. That is a ton of value. That is tremendous versatility.

Now we came up and shook this prospect’s hand at the Centre College game this past weekend on the Centre sideline. It isn’t the first time we have seen him on a visit weekend at Centre, with his famous father in tow, so we “feel” the Colonels are very high on this prospect.

This defensive back, which is where we believe he plays in college, is listed as 5-10. Standing next to him, he is considerably taller than that. We would put him easily in the 6-foot, 6-1 range.

This guy registered a hand-held forty-time this past summer at the EKU prospect camp. The “other Colonels” timed Myers at 4.57-seconds. With what we believe his length to actually be, coupled with the quick reaction and ability to read incident to having a high football IQ, Myers will always play faster than he times, and it isn’t as if he’s slow or anything.

We have watched his highlights, including clips from the camp at EKU. He is heady, has quick reaction and a high football IQ. Myers closes on the ball quickly; demonstrating explosion, speed, and a nose for the football. Myers shows up around the football even where teams are running away from him.

This is one of those “remember when” moments. We believe this player will have an incredible college experience and career. We just hope it is somewhere we will get to enjoy it. Wouldn’t mind hanging around the “old man” too.