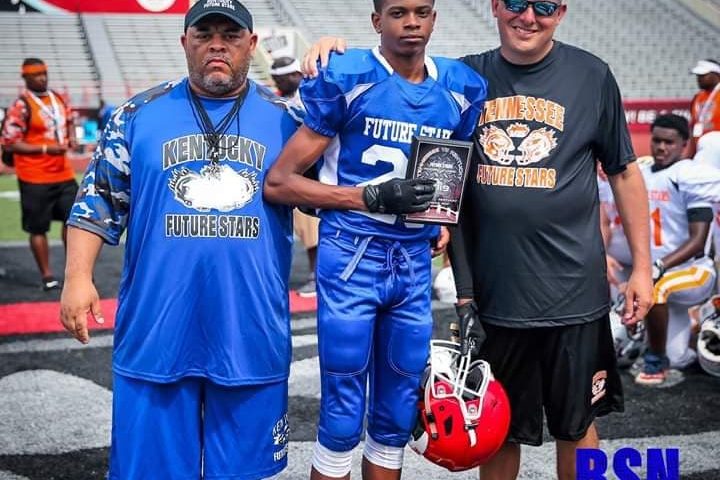 We feel compelled to tell you something about the Monroe family people in Louisville already know, people admitted to #Brotherhood already know, and people all over the commonwealth are shortly about to learn. Monroe’s ball-out and that is just a fact.

We have seen this on Kentucky Future Stars teams forever. We have seen this at Kroger Field out of a young Monroe (Jayshawn “The Shizz” Monroe) who “balled-out” for Male High School, particularly down the stretch of the Class 6A, Kentucky Football Championship stretch run in 2018. We see ample evidence of it in the photograph our friends at the Bluegrass Sports Nation (Brendon Miller) sent us to use as the “feature photograph” for this article.

Here’s a key pointer for the unsophisticated Kentucky middle or high school football fan…If you get to the end of the Kentucky-Tennessee Future Stars Classic, and you are posing in a picture with the two Directors of each team flanking you, you have certainly done quite a bit of footballing. Those photographs are generally reserved for players being adorned either offensive or defensive MVPs.

Jeremiah “J2” Monroe was this year’s defensive MVP for Kentucky-8th Future Stars, and the way Kentucky’s defense performed, that is quite a mouthful. We went to the Kentucky-Tennessee Future Stars Classic this year and the 8th-grade game, marred with exceedingly poor play at some offensive positions, was equally distinguished with some superior defensive effort by both Kentucky and Tennessee. How superior?

Put is this way, Tennessee’s lone score, the only score in the entire game for either team, was occasioned by poor punt protection and getting possession just outside the 10 yard line. Aside from that, the game was a 0-0 stalemate.

When the respective defenses are that unyielding, being deemed the MVP for either is really special. Kentucky’s defensive MVP, Jeremiah “J2” Monroe fits the bill well. He is very SPECIAL and Male High School is esSPECIALly happy he will be joining his brother on its roster this Fall.

Jeremiah is a corner/safety prospect with plenty of length as he is 5-11 now, with really long extremities, giving him both length and anatomical evidence he is likely to get significantly taller and longer. When you look at the kid, he’s basically a slender and long-necked kid, with a short trunk, and really long arms and legs. We call that “high-waisted” and “high-waisted kids” at Jeremiah’s stage of development aren’t close to done growing either long or tall.

Late physical developers like Jeremiah tend to lengthen and don’t tend to get to their full running speed until on into High School. J2 Monroe is already clipping the 40-yard dash at 4.8 seconds which is blistering fast for this long-legged gazelle.

If you wish to compare Monroe to older players from around Kentucky who are tearing it up on the recruiting trail right now, and once looked eerily similar to J2 when they were his age, we have two examples for you. Just to see how Monroe is likely to develop both physically, and as a player, look no further than Louisville’s Elijah Blakey (duPont Manual) or Hopkinsville’s Reece Jesse (Hopkinsville High).

Monroe is physically similar to where both Elijah Blakey (Louisville, 2021, offered by Western Michigan) and Reece Jesse (Hopkinsville, 2021, offered by Purdue, William & Mary, APSU, and Tennessee Tech) were when they were eighth graders. Both Blakey and Jesse are in the 6-3 to 6-4 range now and both have obscenely long wing-spans.

Blakey still plays DB and is one of the best back-four guys in Louisville (or in Kentucky for that matter). Jesse, who played safety in 8th grade and led the KYMSFA with 9 interceptions in 2016, is now mostly recruited as a WR though he will play some safety at Hoptown this Fall.

We could see Monroe on either side of the football for Male over the course of his career. Like both Blakey and Jesse, we could also see him approaching 6-4, with an 80-inch wingspan, before his development is complete. Also like Blakey and Jesse, we predict he will start getting offered before he ever enrolls in the 11th grade.

Absolutely none of this is surprising to regular readers of KPGFootball either. We know football, it’s all we cover the whole year round. We know football players. We know a Division I, FBS, Power-5 level prospect when we see one. We also know something even more tried and true than the other things we proclaim to know. We know Monroes can flat out ball!