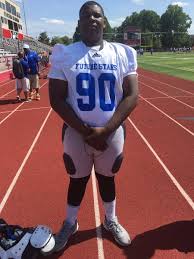 Well, the Kentucky Future Stars combines are upon us. This is the premier all-star football game for either Tennessee or Kentucky and regularly draws the best players. It is the annual Tennessee-Kentucky Future Stars Classic with both a 7th and 8th grade game. The 8th grade contest is played by players as big, fast, and explosive as many high school football starters. The game, itself, looks like you’re watching a high school varsity contest and many of the players, for both Tennessee and Kentucky, will be plugged-into Varsity lineups before they leave their 9th grade seasons. Many will come into the game with offers to play college ball, or get offered in short order. We thought it would be fun to highlight just a few 8th graders whom, we expect, will make the Team Kentucky Future Stars roster, should they try-out, and why…

Ben is a 5-11, 180 pounder who has played in middle school TE (“H” or “Y” in the Spread), DE, OLB, and RB. We believe at Kentucky Prep Gridiron he has a tremendous future at the high school level at any of these positions depending on how he physically matures and can see him really turning into a big powerful running back in the mold of a Logan Parker, or even Austin Gough. Gough took over last year’s Tennessee-Kentucky Future Stars Classic at the RB position in the 4th quarter for Team Kentucky Future Stars. Ben is an accomplished player being selected, already in middle school, to Team Kentucky FBU and to the Kentucky Future Stars 7th grade team. Ben runs very well, gets north-south quickly without any negative steps, and, at LB, exhibits the ability to both shed blockers and scrape down the line to make plays. Ben is a sure tackler, and looks, on film anyway, to have excellent speed.

Taylor County used him to make big offensive plays this year from both the backfield offensively and down the field in the vertical, deep, down-field pass game. He gained easy seperation from opposing defenders. When this kid hits a weight room, if he hasn’t already, it will be fun to see what he does on a football field, provided you aren’t the coach attempting to contain him.

Why he makes it…Ben makes this team, provided he attends the tryout, because he offers versatility and ability on both sides of the football too valuable to not select. He has played a lot of big time games in big-time atmospheres and his ability to perform, when under the spotlight, is well established.

William Hughes a 5’10” 245 pound, Class of 2022 player, who was selected for and played well in the Bret Cooper Junior All-America Game held in Dallas, Texas, December 31, 2017. William has tools one doesn’t usually see in 8th grade linemen with his speed and athleticism in addition to his naturally being both explosive and strong. William Hughes is the second consecutive HMS OG to be selected to the prestigious All-American Middle School Football Team. Hopkinsville has had numerous players play in the Future Stars game, all of whom acquitted themselves very well. William tried out for the East-West Kentucky game and wasn’t selected because HMS didn’t pay some fee to the KYMSFA, which isn’t William’s fault. If the KYMSFA weren’t going to allow players in the game from schools which didn’t pay the fee to them, they never should have taken the young man’s money.

Hughes, as an interior offensive lineman, has proven to be an accomplished pass protector from his LG spot. In the run game, he is a downhill, drive blocking machine. Hughes is persistently driving his man deep into the Defense’s 2nd and sometimes 3rd level. At DL for the Tigers, Hughes, this past season in both 8th and 9th grade games, was un-blockable. Hughes has tremendous launch and get off working in tandem with active and violent hands shedding and discarding would-be blockers. Hughes also boasts a 4.0 GPA.

Why he makes it…Most offensive linemen in Middle School are fat. William while thick is neither fat nor sloppy, and, more importantly, athletic and active. Like both Ben Vaughn and Kiyaunta Goodwin, he has seen the big stage and performed well on it. He will see the varsity field early next year provided he gets done in the weight room, this offseason, what is expected of him.

Treyvon Jefferson, who easily passes the eye test with his excellent height and length, attended a passing camp at WKU and showed Western’s staff, and the other campers, what’s what at the two day QB Prospect Academy, last summer. Trayvon was recognized for the longest toss of the weekend, covering 50 aerial yards, with a high school football. Treyvon bested any camper attending, from 7th grade through rising sophomore in HS. In addition, campers were coached up in the proper way to execute 3, 5, and 7 step drops and set-ups, another part of QB skill play where Treyvon exhibited ability well past his years.

Treyvon, at 6’3″ and weighing 165 pounds, has some escapability, but I wouldn’t describe him as fast. I would estimate him as a 5.3-5.5 40 yard dash guy who sees the field well and has a really strong arm. He is comfortable playing pro-style, or playing in the Spread, and can move the pocket, right or left, and still deliver an accurate throw. Jefferson squares his shoulders, moving right or left, and attacks the line of scrimmage, keeping both his head and eyes downfield searching for targets. Treyvon started at QB this past season for HMS and also played freshman ball. Jefferson should have started for the freshman team too as he was its best QB. Jefferson doesn’t have the type of big game experience as Goodwin, Hughes, or Vaughn, so we don’t know what he will do on the big stage. I am willing to bet we are about to learn.

Why he makes it…He will make this team because you can’t coach height or length. He has excellent arm strength. Given adequate time to set up, he can stretch the defense and create opportunities in the run game by discouraging the Tennessee defense from crowding the line of scrimmage.

I don’t know how far back some of your memories go but we wrote an article about Kiyaunta Goodwin on April 23, 2017. The article pertained to his being selected to go the Under Armor Next Game. We told you we tend to not write about kids until they are transitioning from 8th grade to high school because most kids entering 8th grade are not far enough along physically to forecast much about their prospects. We also told you we were writing about Kiyaunta because, at 6’6″ 342 lbs. (at the time), we felt like he had progressed enough physically to go out on a limb and forecast he was a college football prospect notwithstanding his youth and very much worthy of our coverage.

Kiyaunta then played in the Tennessee-Kentucky Future Stars Classic in Clarksville, Tennessee for the 7th grade Kentucky Future Stars team. I remember shaking his hand and remarking to Chris Vaughn, with whom he trains, that Goodwin shook my hand like a grown man and not a 7th grader. I believe I wrote about that very encounter when I reported on the camp for Teams Kentucky (7th and 8th) while down at Murray State University.

Goodwin is the top ranked prospect at his position in the United States of America, much less Kentucky. He has been offered by numerous SEC schools, Kentucky and Georgia among them. Goodwin, and his offensive line cohorts in last year’s game, got abused by Knoxville’s, Malachi Harrison. Harrison, for his efforts, was voted the Defensive MVP of the game for Tennessee.

That is not a criticism of Goodwin, or anyone else who happened to man the offensive front for Kentucky, last year, as Harrison also abused the West All-American Team‘s O-Line in the Bret Cooper Junior All-American Game. For his efforts in Dallas, he was additionally selected Defensive MVP this past December (Hughes and he were on the East squad which won 22-0). With added training at Chris Vaughn’s Aspirations Fitness Institute, and some more time to mature into his frame, I imagine Goodwin might see an opportunity to get even with Harrison. As Harrison will be on Tennessee’s team again this year, the rematch between these two is a story-line to monitor moving on into the yearly classic.

Why he makes it…He makes it because he is Kiyaunta Goodwin. He’s the top rated tackle in America in the 2022 Class. He’s been offered by Kentucky and Georgia, among others, and because he’s 6-7 and weighs 350 of well put-together, blocking, aggressiveness. Both he and his OL cohorts have a score to settle. Goodwin is accustomed to the big stage and he will be ready to make good on any debts outstanding, I would imagine.

The below are the tryout times and locations…

This is Fletcher Long, reporting for Kentucky Prep Gridiron, reminding you to show up and PLAY THROUGH THE WHISTLE!