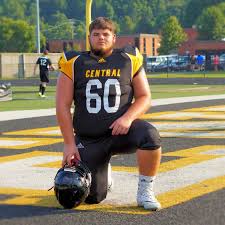 Paintsville, Kentucky has a population around 3,500 people according to the latest Census and is located at the confluence of the Paint Creek and the Levisa Fork of the Big Sandy River amid the foothills of the Appalachian Mountains in the Cumberland Plateau. Any one can tell you that. Any one can also tell you the name, Paintsville, is thought to have originated from the Indian art painted on debarked trees near a local salt lick when the first white settlers arrived. What only the true Kentucky High School football officianado can tell you is boy, can they play football in Paintsville, Kentucky.

Paintsville High School, in Class 1A, District 6, went 11-2 last year losing to State Finalist, Raceland, in the State Quarters. Johnson Central High School, which last season was defending its Class 4A State Championship the Golden Eagles won in 2016, were State Finalists in 2017 and finished the year 12-3. Combined, Paintsville, Kentucky won 23 of the 28 times it played a football game last season. So how does a little town like Paintsville keep whipping butt on the football field. Well, having 335 pound, bench pressing, 550 pound squatting monsters like Andrew Clifton doesn’t hurt. It also doesn’t hurt to have the 190 pound State Wrestling Champion and AFI-KPG Sophomore All-State LB (Devin Johnson) or AFI-KPG Freshman All-Stater at Guard in Cameron Willis.

Now, it is no secret that I like the big, punishing linemen. It is not that I don’t think Skills (RB, WR, QB, etc.) are important; everybody on a football team has to do his job for the team to succeed. That requisite symbiosis is what makes football, in my humble opinion, the greatest among the team sports.  I think we fans tend to pay the lion’s share of the attention to the ones scoring the TDs and fail to properly credit the ones who made sure the play could happen. The one who lays his body on the line for the team to succeed regardless of his particular efforts receiving little to no mention in the sports page of the local periodical.

Coach Jim Matney’s Golden Eagles, last season, ran for 32 yards shy of 5,000 (4,968) in route to scoring 645 points in 15 ball games. That is averaging 331.2 yards per game on the ground and scoring 43 points a ball game while, practically, throwing a forward pass only on occasion (averaged 86 yards passing per game). When you can run the ball for 331 yards a game when everyone in the ball park knows you are running it, you are getting it done upfront partner.

Andrew Clifton lists, as his primary positions, both Guard and Center along the offensive line. He has hit a growth spurt and has shot up to 6-3 and weighs in at a well-proportioned 300 pounds, though I think he may well be heavier. He played much of last year a tad over 6-0, which would probably limit him to playing Center at the next level had he stayed at that height, but, with his added length, he has grown into an OG prospect, in addition to his ability to anchor the OL. Clifton exhibits really good athleticism for his bulk and runs well. He also performs well academically and exhibits a lot of football IQ in his play. Andrew has excellent core strength (550 pound squat) and plays with really good leverage; firing off and getting down-hill aggressively in the run game. Clifton is a finisher as a drive blocker, consistently driving his defender through the turf.

Clifton has the build and aggressiveness to play inside along a college defensive front. He would be hard to dig out of there for sure. He didn’t play many defensive snaps his sophomore season as Johnson Central prefers to platoon along its offensive and defensive fronts, but I believe college coaches will have interest in Clifton, going forward, on that side of the ball. I would be surprised if Coach Matney doesn’t insure Clifton gets defensive snaps along the front this upcoming season.

Andrew Clifton is a Dude and linemen like him win championships which is just another reason we predicted Johnson Central High School will be in the mix again in 2018. This is Fletcher Long reporting for Kentucky Prep Gridiron reminding you to PLAY THROUGH THE WHISTLE!