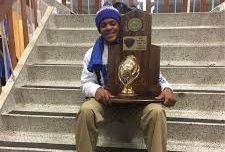 The most senior rank in the United State’s Navy is Admiral, which, coincidentally, is the mascot of Danville High School‘s athletic teams. Historically, since its inception, Admirals have commanded fleets and squadrons, or the ships and dockyard facilities in major ports. An Admiral has overall command of naval forces in the line of battle. Sort of similar to what is expected of middle linebackers over a defense. Linebackers have been described as the heart of the defense in an article (linked) by Ron Vanderlinden and written for humankinitics.com entitled, Many qualities in a successful linebacker. Vanderlinden goes on to relate a linebacker’s attitude is crucial to the attitude of a defense and that linebackers have to have competitiveness, intelligence, physical toughness, leadership, a willingness to accept coaching, quickness, agility and strength. Well, it’s not like we’re asking very much, huh? I am sure, with all that is expected of linebackers, Coach Clay Clevenger at Danville High School counts himself fortunate he has an Admiral like Darrian Bell steering his defense’s vessel on Friday nights. If he doesn’t…he certainly should.

Though only a sophomore last season, Darrian Bell led the Admirals with 144 tackles, an incredible 92 of which required no assistance from anyone else. Bell also recovered 3 fumbles and intercepted 2 passes showing he was a linebacker with an incredible nose for the ball coupled with the willingness to take it away from the opposing player or intended recipient. Through Bell’s efforts, Danville High School gained 5 extra possessions over the course of the year by way of turnover. There is no telling how many times a key tackle by Bell led to a change of possession over the course of a season during which Danville High School finished both 15-0 and Class 2A State Football Champions. The district 7 Admirals had two scares all year; one at Waggoner, where they escaped 49-46, and the other at home playing Tates Creek. The Commodores from Tates Creek, a Class 6A, district 8 football team, won 9 games itself last season in Kentucky’s largest classification. I believe Admiral outranks Commodore any way; so, its is just as well. Other than those two outings, Danville beat the remaining 13 teams by double digits including the mighty Mayfield Cardinals in the State Championship game 34-21.

Darrian Bell is a one-man hit parade who is 6-0 and weighs in at an even 200 pounds. He has registered lifts of 325 pounds on the back squat and a power clean of 235. Perhaps more important to you college coaches out there is Bell already has a qualifying ACT score of 21 and a 4.29 GPA. We call that a NCAA Clearinghouse no-brainer. Going back to our checklist taken from the  Vanderlinden article (above linked), Darrian Bell seems to check everyone of the listed characteristics for linebacker play. This is one Admiral who appears ready to continue steering Coach Clevenger’s vessel through the playoff canal out to championship waters.