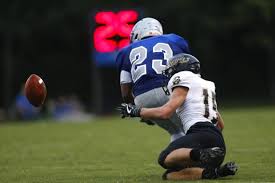 Last year, KPGFootball partnered up with the American Fitness Institute out of Louisville, Kentucky and did something which had never before been attempted. We recognized that traditional All-State Football teams like the Courier-Journal Coach’s team and the AP (media) team both heavily favored seniors with a smattering of juniors. Generally, freshman and sophomores were locked out of post-season recognition. Well MaxPreps has both freshman and sophomore All-American teams, so, why not? We convened a state-wide selection committee and selected 64 freshmen and sophomores for All-State football distinction. In my humble opinion, the teams were a rousing success. So much so, we are touring the Commonwealth this year with a Mountain stop, June 23, at Phelps High School in Phelps, Kentucky. We didn’t get every deserving player, but every player we did select were certainly worthy of the recognition. One selection to the sophomore team, Reese Smith, from Boyle County High School immediately proved himself particularly worthy of the distinction.

There doesn’t appear to be anything on a football field Reese Smith can’t do. Last season, the 6-0, 175 pound WR/DB in the Class of 2020 caught 50 passes for 1,037 yards and 14 TDs. He scored 104 points for the Rebels over the course of the season. On defense, Smith recorded 40 tackles with 34 stops being solo tackles. Where he is playing, with the front seven he had in front of him, that’s quite a few tackles. Smith also intercepted an eye-popping 9 passes. When it mattered most, with the State Championship on the line against Corbin, Smith caught 5 of Reed Lanter‘s passes for 120 yards receiving with 3 of the receptions being for touchdowns, while intercepting two Corbin passes, one of which he returned 40 yards for a pick-six. Reese Smith, for his efforts was selected the Class 3A Championship Game’s MVP.

Reese is a superior athlete who both runs track and plays for the basketball team at Boyle County in addition to playing football. It has been reported to KPGFootball that Smith plays for the Louisville Magic AAU basketball team which cuts into time he could spend attending different combines and camps. We believe, at KPGFootball, that Reese Smith and Vito Tisdale, at Bowling Green High School, are the best two DBs in Kentucky in the 2020 class. Smith has been described by people around Boyle County as being a great kid from a very solid family who is both grounded and humble. Humility, with as good of an athlete and football player as he is, must require quite some effort. Smith plays like every ball in the air is his; there is no such thing as a 50/50 ball to him. The kid is not just an athlete but a real winner. We have even heard stories that growing up that he had every other kid in the youth league terrified and that it has been expected that Reese Smith would be a football star since he was in either 2nd or 3rd grade. Reese was the best player on a Boyle County Middle School football team that beat practically everyone on its schedule by 40 or so points.

As someone involved in the selection of All-State football players, it is nice to know when you get it right. Whether this selection was money is something about which there can be, literally, no debate.