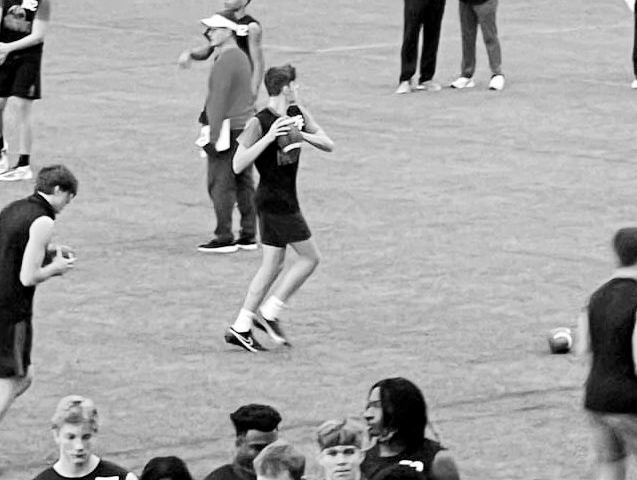 If you like having an explosive athlete behind center, he’s also your guy. He has registered a 113″ broad jump this camp/combine season, has a 31.3″ vertical, squats 355-pounds, runs the 40 in 4.9 seconds, and short-shuttles in 4.45-seconds.

If you hope to find a student-athlete you won’t have to pray past the NCAA Clearinghouse, he’s your guy. Coburn boasts a 3.2 GPA and while we couldn’t find a registered standardized test score on him, he is entering his junior year and will get a go at the ACT really soon. There is no reason to expect a score out of him any lower than somewhere between 21 and 24 and no telling where the top-shelf of his range will lie.

If you are looking for a hard worker, he’s definitely your guy. He has been all over the place performing at camps and combines this offseason. He has turned heads.

“What makes me different than most kids my age,” Coburn has released, “is my work ethic. My #1 goal is not to be the best player, but to [be] the hardest worker. I believe that if I work hard, success will come.”

We believe that too, which is why we are featuring him today. His numbers from the ’20 season are sure to exponentially increase, as are his team’s fortunes.

Looking at his numbers, his 43% completion percentage and at 1:2 touchdowns to interceptions ratio (5-TD passes: 10-thrown interceptions) are not bound to turn many heads. Neither is his sub-700 yards passing total in 7-games or his team’s 0-8 mark under his stewardship.

In fairness, he may have done better statistically. Berea never reported any statistics from game 8 of last season, reporting only 7 of its 8-games. May have had a huge last game. No way for us to know.

However, calling his on-field performance statistically pedestrian is charitable. Nevertheless, as the great Mark Twain before wrote, “There are three kinds of lies: lies, damned lies, and statistics.”

Twain believed it error to use the persuasive power of numbers to bolster weak arguments. We believe casting off this QB-prospect by citing his ’20 statistics to be a weak argument.

First of all, Coburn was a starter for Berea in ’20 as a sophomore. If you compare his statistics against other sophomore varsity starters at the QB position Coburn begins to look much better. Secondly, what one does in any one year doesn’t hold much water for what they are capable of doing going forward.

Berea has its leading ground gainer back for ’21 in Jaiden Cunningham. Two of Coburn’s favorite three targets from a year ago return in Clayton Martinez (’22) and classmate, Yamil Cruz (’23).

Berea’s offensive firepower from ’20 returns pretty intact and these guys have quite a few game-speed reps under their collective belts now. This type experience will “pay off.”

Pouring over Coburn’s offseason performances this spring and summer, and factoring in his youth and inexperience in ’20 with his ever improving frame and athleticism, we see quite a bit of improvement possible for this prospect. With his work ethic, we’re willing to bet on it.