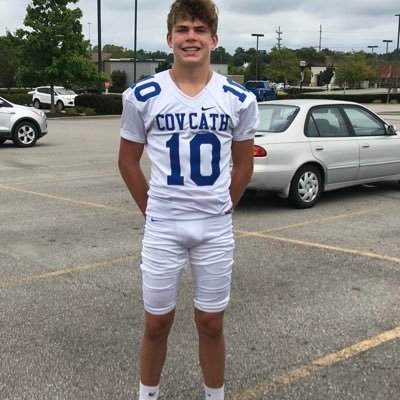 We like to evaluate young talent and tell readers from where the next generation of stars will be coming way prior to their arrival. Sometimes, it is relatively easy to predict. Others, well not so much.

The Kentucky Future Stars program and the Team Kentucky Select FBU teams in middle school have proven reliable indicators through the years. They don’t find them all. For that matter, who does?

The Battle of the Regions may end up being a source for finding top-flight talent too. This event is in its infancy. We will see in 2-3 years whether it reliably identified future high school star talent or not. We will have to “wait and see.”

We don’t get them all either. However, we make a way more thorough investigation than anyone else.

We aren’t criticizing other outlets. We’re just stating both the obvious and facts.

We love Covington Catholic’s Willie Rodriquez. Rodriquez is a ’24 prospect who is forecast to play TE/LB in high school.

He was buried on the JV/Frosh roster a year ago, but he was a freshman then. Besides, who in the heck gets much varsity burn as a 9th-grader for programs like Covington Catholic?

This kid has tremendous frame, as schools like Miami of Ohio have already learned. Rodriguez is already making FBS visits and hasn’t hit the varsity playing surface yet.

He is an accomplished wrestler and wrestled in the state championships last year for Covington Catholic. We understand he has a future in baseball too.

From what we can tell watching some film Rodriguez posted online from camp/combine season, schools are interested in him as a TE primarily. He looks to run good routes and uses his length and frame well to work the middle of the field. He looks fairly quick in and out of breaks and changes direction like an athlete.

He keeps defenders on his back while catching footballs well away from his body. He brings down aerials in his hands, as he is supposed to do. He high points footballs well and will be a challenge to cover for 2nd-level defenders.

College football players find the field over the course of their sophomore seasons regardless of where they play. We can think of exceptions to this, but this is what recruiters believe and once a college recruiter gets a notion in his head it is generally “all she wrote.”

Rodriguez is a future college player. He will play up on the varsity roster this coming season. For all we know, he will start out there.

He will find his way into the lineup too, before the Fat Lady (the opera isn’t over until the “Fat Lady” sings) has sung on ’21. Remember from where you first heard this.