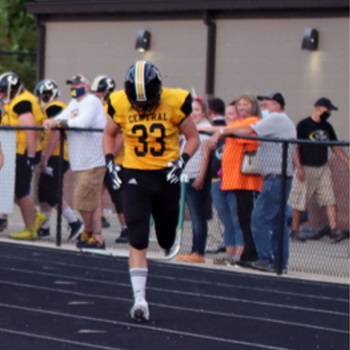 We featured this prospect close to exactly a year ago. Here is that article, should anyone want a refresher.

Since publishing the article (above linked), our enthusiasm about this prospect, and where he ranks among his peer group in the commonwealth of Kentucky’s ’22-class, hasn’t damped in the slightest. We still believe him to be among Kentucky’s very best, both overall and positionally among ’22 TEs and DEs.

Keygan Pelfrey is being pursued by numerous colleges around Kentucky, including Centre College. The school from Danville, Kentucky dropping over 50-million on its athletic and student wellness facilities, makes the Colonels among the hottest college programs out on the recruiting trail in the commonwealth right now.

Should there be an offer extended this early to this ’22-prospect, it would make any school’s intentions, regarding Pelfrey, appear quite clear, at least to KPGFootball. These schools would really be “after him.”

Potentially, Pelfrey with any Ivy or Near-Ivy school would be a match made in heaven. Pelfrey is an athlete who could play two sports in college, a point about which we are sure schools recruiting him are well aware.

Pelfry batted .306 this past season, sprinkling in 34 hits over 111 official plate appearances, with 2 HRs, a triple, and 9-doubles. He was among the best hind-catchers in the state-wide game this past season.

His football performance was equally (if not more) awe-inspiring. Let’s take a look at his offensive production.

He reports TE among his positions and he spent much of his offensive time as the TE aligned on the other side of Zach Russell (Class of ’21, FBS-signee). Now he didn’t catch a single pass. However, the team attempted 41-passes in 11-contests. Heck, he only caught 8-fewer passes than Russell, and Russell signed with Bowling Green to play TE.

His defensive production, at DE, was another matter completely in ’20. Pelfrey totaled 52-stops a year ago, with 5.5 TFLs, 2 QB-sacks, and a fumble recovery (FR).

Perhaps the most impressive stat for this particular prospect is that 3.8 GPA the young man is carrying. That would seem to explain the courtship from a legion of prestigious academic schools. We’ve have also seen him repping out at 315-pounds on the bench press so his strength isn’t in question in the least.

We can’t possibly stress enough how important the student part of student-athlete has been and will continue to be going forward for athletes seeking to get part or all of their educations financed by an entity apart from their parents or a government loan program. A recruiter sees what Pelfrey does in the classroom and it is easy to recognize Pelfrey has made himself an attractive target at many different levels of NCAA/NAIA competition.

Pelfrey is a kid many D-1s will tell you, “isn’t quite framed-out appropriately to play here.” This is a phrase beginning to make us want to puke; and frankly, the ultimate cop-out to having to scout, watch film, and really uncover the talent capable of playing at the school’s level of competition.

Were these same schools only willing to take a chance on players like Pelfrey, or perhaps do their own evals instead of farming it out to recruiting/ranking services, these schools would learn there are “Pelfreys” out there, in the prospect world, absolutely capable of playing at their level, and thriving. If you’re a small school collegiate fan, let’s hope that remains a secret a bit longer.

We could see a FCS program taking a chance on this kid and packaging him as a Football/Baseball signee to pool resources. We could even see him getting some FBS, non-Power 5 attention. We could see him using his academic prowess to land at a super-prestigious Ivy or Near-Ivy school and making an eventual All-Conference/All-American at that level of play.

Regardless of where we see him, you can see him this coming Fall playing for the Eagles of Johnson Central. We hope you avail yourself of the opportunity. His ilk don’t come around all too often.