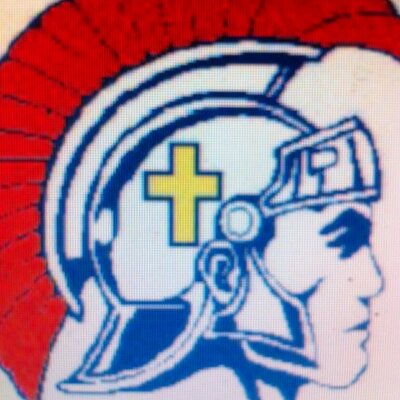 Most of the attention along the offensive front for the Centurions is naturally focused on Class of 2020’s John Young. What’s not to like? John Young (@the_johnyoung on Twitter), pictured to the left of this paragraph, a selection in 2017 to our KPGFootball, sophomore, All-State Team, is a four-star offensive tackle, is 6-6 and weighs 295 pounds, and presently holds around 20-FBS offers for his future services with the likes of Penn State, Ohio State, Kentucky, and Michigan being just a few of the suitors. However, no-one can claim he was the only big-timer, or even All-Stater, the Centurions boasted along the front which led them to a 15-0 record and the Class 2A, Football State Championship.

It isn’t quite as if Mauzy just materialized out of nowhere to make our All-State Freshman team either. Mauzy was selected and played on the same Team Kentucky Future Stars as two other top 2022 linemen we have before featured in Johnson Central’s, Owen LeMaster and Lexington Christian’s, Anthony Johns. With how the three of them played this past year for elite programs as only first-year players, they must have composed quite the formidable Kentucky offensive front in the Tennessee-Kentucky Future Stars game. No wonder Kentucky won…again (forgive the jab, Team-Tennessee).

Mauzy played in 10 of CAL’s 15 football games and was clutch, up-front, for the Centurions down the stretch. Incidentally, for KPGFootball’s money, and we know we have been very complimentary of the offensive front which led the Belfry ground game in 2018; but, if we are being honest, CAL’s offensive front had to be the very best we saw play in 2018. We would have to give them a slight edge over Belfry owing to being more polished and adept in pass-protection while equal to Belfry in drive-blocking.

The CAL front was big but, unlike some similarly-sized fronts, all five Centurions were athletic, quick, explosive, and multi-level, downfield blockers. These guys, especially tackles Mauzy and Young, were just impressive athletically.

Mauzy has excellent balance, quick feet, dynamic hand-punch and a low and hard get-off. You just don’t see freshmen linemen like this come along very often.  Matthew is a guy who looks to still be growing and there is no telling, from year to year, what his dimensions may be as he reports to camp, Fall after Fall.

As Matthew continues to weight train and mature, he will continue to add strength, power, and explosion to a game already advanced in all three areas over nearly the entirety of his graduating class, with few exceptions. There will be a day, when Mauzy comes into his junior season, and John Young is starring on Saturdays, that Matthew Mauzy will become The Tackle as opposed to being the other tackle. Remember where you heard it first, when that day arrives.