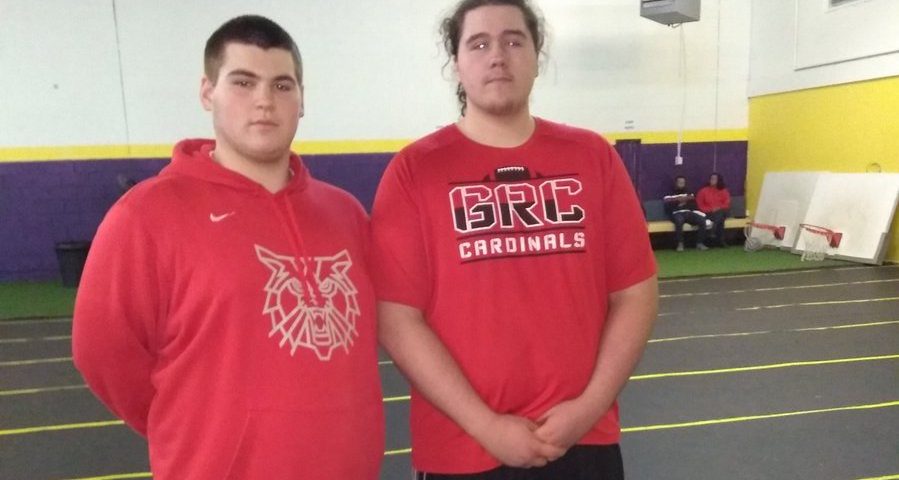 Well, if you like your offensive linemen big and nasty, we believe we may have found exactly for what you have been looking. Blake Watkins is a 6-5, 315 pound offensive center anchoring the line of scrimmage for George Rogers Clark High School in the 8th District of Kentucky’s 6A classification. Yessir, that is big-boy football, and Blake Watkins is a big boy.

We got an opportunity to watch the highlights, which we have above linked, and there are some fine-tune things we would suggest to the big fella. However, anything he is doing wrong can be coached up, so to speak. One can’t coach up a frame. His frame is exactly for what both FBS and FCS level programs are so feverishly searching.

If you will look at the picture attached to this article as its featured photograph, we published a picture from the Aspirations Gym of both John Mudd and Blake Watkins taken this past weekend. We use John Mudd, who is approaching 6-3 and weighing every-bit of 290, as a sort of size reference. Just from off that photograph, you have to notice Blake has outstanding height; but, even more importantly, outstanding arm-length. It is that length which will permit him to be moved out to right or left tackle should some program ever be so inclined.

It just adds to his versatility. Blake Watkins is a five-slot guy. He literally can play any of the five positions along an offensive line. Guys like that are unbelievably valuable to any team, college or high school.

Blake is a kid who is playing offensive center right now and there isn’t anyone who is going to run over him. That is true regardless of the classification of Kentucky football in which one plays. We would love to see him develop quicker and more agile feet and play with better pad-level, which (we are confident) is exactly why he is working at Aspirations Gym under the tutelage of super-trainer, Chris Vaughn.

Watkins helped anchor a front for the Cardinals which gained 2,554 yards from scrimmage on the ground in 11 games. The backfield boasted two very capable running backs in Nitavius Thomas (1,148 yards rushing in 165 carries with 16 rushing TDs) and Azariah Israel (825 yards rushing in 99 carries with 9 rushing TDs). The team finished 7-4 in Kentucky’s largest classification of football, losing in the first round to the Cooper Jaguars in 2018.

Watkins is a guy who really gets after it and, with the offseason regimen he is undergoing, is also a guy who’s motor will increase while his leverage and pad-level at which he plays get ever-lower. Blake Watkins will play more explosively working defenders “low to high” in 2019 and KPGFootball predicts his stock will exponentially rocket as his public profile increases and his mobility and agility heightens.

The Big Nasty’s best football is still to come. That is a scary realization for all the inside technique guys around the 8th District who have already been taking quite a beating from this guy.