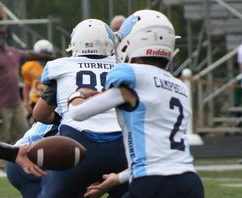 Boone County has plenty of talent coming through its middle school ranks. You may recall our writing a feature about Cameron O’Hara, another ’26 standout on the Rebels’ roster.

If you have forgotten, or missed it altogether, hit the blue, underlined name above provided and you will be linked to that article. Between the two players, they constitute a dynamite tandem downfield in the Rebels’ passing attack, particularly for their level of competition.

Riker is a kid who, thankfully, has something in the way of highlights. Most kids in the ’26 class are difficult to cover. They are what we refer to in the business as “social media ghosts.” It seems like they don’t even exist sometimes.

Campbell is no ghost. In fact, under his picture posted with this article you will find a link to his highlights.

There are several things which stood out to us about this prospect who lists WR, RB, and DB among his positions. First of all, the lesson here for you young prospects is to have a Twitter account. Secondly, make sure the Twitter page has your email address, height, weight, any speed or strength numbers you feel recommend you, and YOUR SCHOOL.

We were able to dig around and learn Ryker plays at Boone County. We do considerably more digging than a college recruiter will.

Campbell is young enough that his “not having his social media presence together right now” isn’t a deal-breaker. However, the time will arrive before you know it when college recruiters are going to be watching Campbell’s film thinking, “Man, how do I get ahold of this kid?”

This is a learning process. All of you readying this, learn this right now. It can’t be hard to find you, if you are hoping programs will recruit you.

We saw several things from Campbell we liked. First off, he is fast.

Speed is something which can be measured by a stop-watch, or you can notice guys like Campbell getting even with 2nd and 3rd-level defenders and easily demonstrating he can “separate.”

Recruiters call that “separation speed.” All three of Ryker’s position groups have to have it and the film should show it.

There were several highlights where he ran off and left defenders who are supposed to be, roughly, as fast as he. Coaches will like seeing that.

He catches the football in his hands, away from his body, and he has nice length and height to his frame. He’s very athletically framed up; we could tell he was quick in space and agile.

He made some really nice tackles on film too. He gathered well, coiled and uncoiled, and delivered a nice, driving tackle to ball-carriers like you want to see.

Overall, this is a prospect who looks to love football. He appears to have plenty of growth room on his frame and is in line with where he should be in that department. If he continues to work hard, we believe he will be a real prospect in the near future.