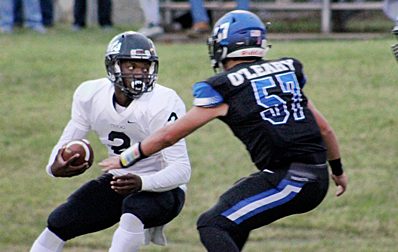 The term scintillating can be used to describe one as being both brilliant and highly skilled. Scintillating can refer to one’s personality or one’s performance. I would say when referencing Trigg County’s Cameron Jordan, who I happen to know personally, it is an apt adjective for both. As this is a football publication, it is being applied here in reference to what has been, thus far, brilliant performance on the football field.

Cameron Jordan played his Middle School football for legendary, MS, Head Coach, Darrel Keith prior to both their moving on to bigger and brighter things. Coach Keith is now the Offensive Line Coach and Freshman HC at Christian County High School and Cameron Jordan is now a Varsity football star, though at a different High School than where he performed in Middle School. Coach Keith discovered Trigg’s football star when he was in 7th grade trying to play basketball. Coach Keith, who we interviewed in connection with this article, recalls telling Jordan that Cameron really was a football player attempting to pose as a basketball player and that he needed to leave that Kentucky stuff alone (meaning basketball) and get his rear out on that gridiron. Talk about seeing into the future, good call Coach Keith.

Jordan is 6’0″ tall and weighs a stocky and well muscled 210 pounds while still possessing great explosion and above average speed. Cameron has been hand timed in the 4.7 second range in the 40 yard dash with a pro-shuttle of 4.5 seconds. Coach Coby Lewis named Jordan his No. 1 Quarterback, even though Jordan made Team Kentucky Future Stars when in 8th grade as one of the Commonwealth’s most powerful and explosive RBs in MS football. Lewis other option would have been sensational WR prospect and fellow 2020 star, Ja’Kobe Bridges. Bridges had led the Wildcats in total scoring as a freshman last season during which the Wildcats finished just out of the playoffs. Cameron is Quarterbacking the Wildcats as the program is in its second year using the high-octane Tony Franklin system. According to Lewis, for the Wildcats’s offense to be effective, he really needs a hybrid QB/RB anyway as he was quoted at the first of the year saying, if our offense is to be effective, we need about 15 carries a game out of the QB position. So, what are the almost-midpoint of the season returns? Well, according to  yoursportsedge.com, Jordan, in just the game with Ballard Memorial this past Friday night, accounted for 340 yards of total offense and 8 TDs (five passing and three more running) in the Wildcats 55-37 win. I would say pretty acceptable, wouldn’t you?

So far this season, Trigg is riding a three game win streak after dropping its opening contest to Monroe County. The Wildcats have rebounded to defeat McLean County, Crittenden County, and Ballard Memorial in successive weeks. Colby Lewis’ Cats host Russellville High School, who is coming off a rare loss (for them) to cross-town rival Logan County, so the time to pounce may never be much more ripe. Kentucky Prep Gridiron sees this Trigg County Team finishing 6-4 or 7-3 and absolutely heading to the State Playoffs this year.

What do we forecast for Cameron Jordan? Well, we at Kentucky Prep Gridiron, believe Cameron Jordan is a sure fire FCS, Division I, Saturday player and, if properly publicized, even an FBS Saturday player on down the road. We don’t believe Jordan’s college future is at QB, though if we were Coach Lewis he would be playing there for us too. We believe Jordan’s future in college will be at LB, though we can’t rule out him being a RB in college, as playing QB for Coach Lewis isn’t diminishing his running skills much, if at all.