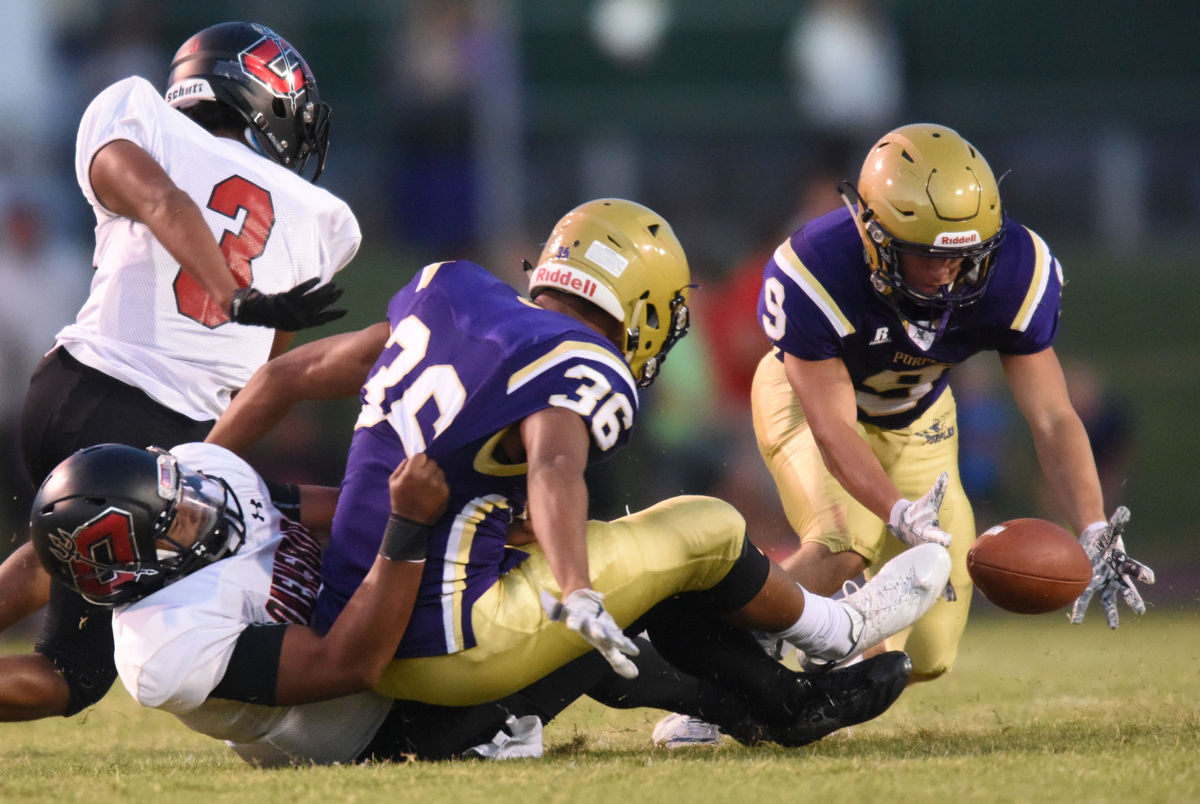 Bowling Green High School came into the home game against the Red Devils of OHS reeling, or so conventional wisdom would certainly have indicated. Bowling Green High School was coming off of consecutive losses to Pleasure Ridge Park (Louisville) and Saint Xavier (Louisville) which found the Purples in uncomfortable and, somewhat, unchartered (at least in recent history) territory. Sure PRP and St. Xavier are 6A powers but, while PRP wasn’t on the schedule last year, BGHS beat the tar out of St. X last year 31-10 on its way to the 5th state title over the past 6 years in the 5A Classification. So what gives? What’s wrong with the Purples? Maybe nothing…

Friday night in Bowling Green, Kentucky at Donaldson Stadium Bowling Green, on the strength of six (6) turnovers, pulled away in the second half to snap its two-game losing streak. HC Kevin Wallace, in an interview with bgdailynews.com‘s Joe Imel, had this to say…It’s good to win and it feels a lot better than losing, but here we are with the same thing that seems to be happening every week – the game gets over with and we’ve got two starters on crutches. I’ve never seen anything like it. I’d just like to come out of a game healthy one time. We are getting to the point where we are running out of bodies. Going forward the injuries, which are mounting, is a concern but it isn’t exactly as if Wallace is replacing the starters with Joe Slappy’s from off his bench. Having the next man up capability is all a part of playing big boy high school football in today’s era.

BG jumped on Owensboro early via a 15 yard TD reception to Zion Kenner and a 4 yard TD run which resulted from an OHS fumble deep in its own territory, but the Red Devils came back down the field and answered with a TD drive of its own engineered by QB Zeke Brown, capped off by a 7 yard boot around the end for the score. Owensboro, after a BGHS field goal staked the Purples to a 17-7 lead, was able to pull to within 3, at 17-14, after back-up Nicholas Bender engineered his own scoring march which ended when Imonte Owsley scored from the BGHS 25 yard line. Right before the half, Vito Tisdale, a Class of 2020 kid from BGHS, whom we have before featured on this site (See, Bowling Green’s Devito Tisdale, June 19, 2017 on kentuckyprepgridiron.com) took a squibber 80 yards to the hizzouse, with apologies to Snoop Dogg. This made the score 24-14 in BGHS’ favor at the half. The resulting momentum swing this late half score created appeared to  carry into the 3rd quarter as Owensboro came out the 3rd quarter flat and broken. Bowling Green scored 17 on the Red Devils in the third quarter to salt away the game before each team scored one a piece in the 4th for the final 48-21 tally.

Still there are some things Owensboro, and opponents of Bowling Green High School, going forward, can take away from this contest which is somewhat comforting. Again, Owensboro has to like what they are getting from its Class of 2021, superstar, Austin Gough who had 7 tackles in the Bowling Green game and 37 so far this young season to lead the Red Devil defense. For those biblical scholars it hearkens my mind to the passage in Isaiah which go as follows… And the wolf will dwell with the lamb, And the leopard will lie down with the young goat, And the calf and the young lion and the fatling together; And a little boy will lead them. Don’t know about wolves, lambs, goats, lions, leopards and the like but, to date, the (not so) little boy leading the Red Devils’ defense is Austin Gough. In addition, the Red Devils were able to gash the Bowling Green defense with 234 yards rushing while only allowing 142 in return. If you are a future opponent of either team, that is a significant number. It gives one hope in playing Bowling Green that you may be able to run the football and some dread in the event the Red Devils dot your schedule down the road that, you too, will be gashed from scrimmage by the Red Devil ground attack. Owensboro slipped to 2-2 on the year with a date upcoming 09.15.2017 against a 1-3 Davies County team. What the Devils will want to avoid is looking past Davies at its next opponent as, the game following, the Devils draw an undefeated Christian County team (4-0) which is ranked number 3 in the 5A poll and will still be undefeated (we believe) heading into the contest with OHS. Bowling Green will match up with an 0-3 Warren Central this Friday and we predict Bowling Green, now also 2-2, will mop up the field with Central heading into a contest against a Greenwood team which is reeling from a 63-6 embarrassment it suffered at the hands of Franklin-Simpson.