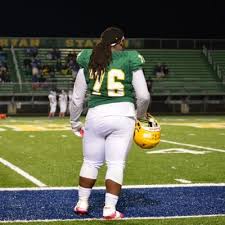 It is way too hard to dig up information on players in the high school game across Kentucky. It is one of the reasons so many extraordinary footballers in Kentucky either go un-recruited or simply slip to levels where they don’t belong.

I would love to be working in a recruiting office at schools from FCS-down and assigned to the commonwealth of Kentucky. I would KILL-it recruiting the Bluegrass for any of these schools. There is an embarrassing trove of athletic treasure in Kentucky for those who know where to mine for it.

Today’s feature is such a glaring example. Giovanni Watson, No. 76 for Bryan Station High School’s Defenders, is a player about whom we should have been talking for years.

For a school named for an 18th-century pioneer settlement, whose mascot is know as “Mean Man,” it shouldn’t require sports-writers possessing the “persona [which] reflects the heritage of the pioneers at the siege of Bryan Station Fort between the British and Indians in 1782” just to discover some of these players. Point is, how does a projected D-lineman, with the burst, power, and explosion of Giovanni Watson languish in obscurity playing 6A football in Kentucky’s second largest city? It’s a fair question.

His highlights are above provided for you under his picture. Watch them and tell me.

Interestingly, almost none of what I would learn about this prospect online appears accurate, though I can’t say for sure. For instance, the team recorded he had 37-tackles, 5 TFLs, 2.5-sacks, and 1 FR in 2019. Watching his highlights put together for this player, I saw more plays than that just on his film, it seemed.

I know I saw a forced fumble among his plays. Where’s that reflected in his stats?

Also, I had to dig through internet material to come up with a height and weight for this prospect who is also an accomplished heavy-weight wrestler. What did I uncover for the effort? All I could find was 5-10, 250-pounds.

I wasn’t searching for his size in 6th-grade! I looked at his pictures I was able to access online and his length and limb proportions didn’t support his only being 5-10. He has long-arms, is high-waisted with long legs, and as far as 250-pound…his backside weighs that.

If he is 5-10, which I doubt, he’s 285 if he weighs a pound. If you look at the photograph featured with the article, I wouldn’t have blinked had he been listed at 6-2 or even taller.

He also didn’t look shorter than the offensive linemen against whom he was working nor shorter than the QBs he was harassing. Maybe Bryan Station plays in some sort of weird, midget-district. I am kidding, they don’t.

So what is the sum of all these parts? Some lucky team has a chance to dip into Lexington, KY and come away with a DT who can be an early starter for them. They can get a guy who has no business playing at their level of play who can morph the team’s entire defensive front and quickly. They can get a guy they may talk about around that school for decades.

This is a cat you should be eye-balling this coming Fall. Matter of fact, while we are at it, don’t count on BSHS having any more 3-8s either. The team has talent on the roster, and a coach in Phil Hawkins who knows how to use it.