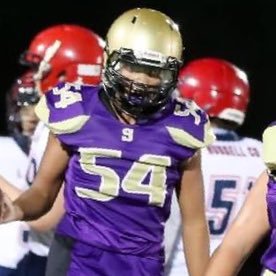 The first thing one thinks when looking at ’26’s Zac Carter from Somerset, Kentucky is “How can it be possible he is only entering the 8th-grade?” We have before discussed this phenomenon. Kentucky Future Stars are not your normal, run of the mill, middle school football players.

Zac played for the 8th-grade Future Stars team. We got he is a ’26 prospect from this Twitter page. He has to be a SB-128, hold-back we would surmise.

Carter is a physical specimen, regardless of whether he is in 8th or 9th grade in ’21. Carter is 6-2 and weighs 200-pounds. These aren’t a soft 200-pounds either as you will notice immediately upon gazing upon his picture alongside this article.

We don’t have any film on Carter as middle school football players rarely have Hudl highlights. However, we watched him play in last month’s Tennessee-Kentucky Future Stars 8th-grade Classic so we can intelligently discuss his skill set.

The first thing we noticed about his play is the young man has really good length and a frame which convinced us he isn’t through getting both taller and longer. He moves very well and fluidly, with plenty of “twitch” and bend, particularly noticeable when he is deployed at DE bringing an upfield rush to apply pressure on an offensive backfield.

Among the last athletic attributes to develop on a young player is “quick-twitch” muscle fiber. That lends, oftentimes, to a young athlete’s appearing lethargic and slow.

Some of these players develop into quick and speedy players later down the road but the lack of “twitch” makes them appear slow when younger. This can be especially true of middle school players who just sort of “shoot-up” height-wise. It can take some time for the athleticism to catch up to the growth.

Someone has been working with this kid on developing twitch. We say this because he came off the ball quickly and seamlessly when we watched him play, getting off the line and into his bend quicker than we expected and too quickly for his OL counterpart.

This is a kid who, should he not get taller and just fills out his present frame, would easily be able to fit into a college roster at DE. Should he continue to develop along his present arch, we could easily see him doing that.

We talked with Team Kentucky’s 8th-grade head coach (Anthony Nino White, Atherton’s high school varsity HFC) about this player. He told KPGFootball, “Carter has a great frame and is sound fundamentally. He has a superior motor and plays from sideline to sideline very well. His upside is tremendous. He will come out of Somerset a special talent.”

Should he get up to the 6-4, 6-5 range, which his frame suggests is distinctly possible, he would be a coveted prospect at either TE or OT. This is a young man who should willingly deploy at the HS level wherever his growth and frame suggests.

He has a diverse skill set now. That is a really good thing. This will leave him many options when options really count.