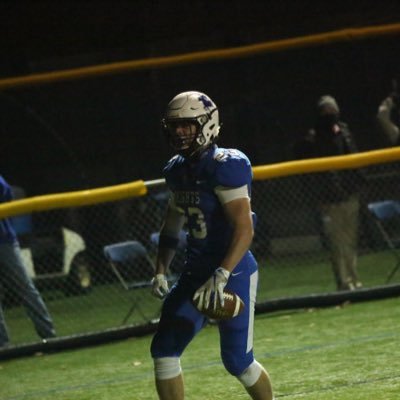 Well it is Monday morning. What better way to kick off a Monday than to write about the Monday who has been tearing up Kentucky’s 4A classification for Lexington Catholic High School? The Monday we are referencing as the topic of this feature is Lexington Catholic’s Jack Monday.

Jack Monday is a specimen. At 6-2, 220-pounds, he is a guy who could easily play LB at the college level as well as a variety of other slots.

Get this, his offensive position is wide receiver. That should give you some idea about his speed.

By playing WR, we aren’t talking about making a token appearance on that side of the football either. Monday and his teammates only got 8-games of action in ’20 but Monday’s production was quite good considering.

Monday was the ball club’s third leading receiver with 19-receptions for 288-yards and a couple of scores. He shuttles in the mid-four’s and clocked the three-cone drill in 7.2-seconds so that should give you an idea about his athleticism and change of direction. He also has a vertical approaching 30-inches.

He has an ability to work well from low to high, like you would want in a LBer, as evidence by his close to 450-pound back-squat. His 97-inch broad jump gives the reader some indication concerning his hips and explosion.

Basically, the kid has it all. Now Monday gave a statement included in his recruiting profile on NCSA (Next College Student Athlete). He wrote, “My passion is football. I really want to play college football at a place where I can help contribute to the team. Academics have always been a priority for me and will always be a priority.”

Looking at the teams recruiting him, he has visited Sewanee, camped at Vanderbilt, has been given an opportunity to play at UK, and has been offered by Centre College.

Just sampling the programs he’s studying, it appears clear to us academics are very important to him. The 3.9 GPA at Lexington Catholic speaks truth to that being an emphasis.

Monday is an athlete. Not only is he an accomplished member of the Catholic football program, but he is an integral part of the Colonels’ baseball program too.

This past spring, Monday batted .273 for the baseball team and did a little pitching as well. He finished with a 2-1 record on the mound, striking out 16-batters in 12.1 innings pitched.

In the end, this prospect will have limitless opportunities to do exactly what he announced as his passion. This kid will play college football and it will be at a place where he can contribute and where academics are a priority.

As we have seen with other prospects we have followed, kids who perform in the classroom give themselves enviable opportunities to make their dreams come true. Jack Monday will be no different. We’re just glad we will get to watch him on Friday nights for the Lexington Catholic Colonels one last go-around.