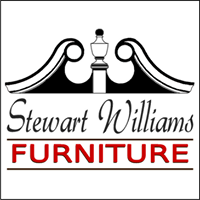 Stewart Williams Company has everything to make your house a home. Visit the showroom located on 801 Memorial Blvd. in Springfield , Tennessee. Stewart Williams Furniture Company believes in the home and furnishing it with the quality brands of furniture and appliances which make your house a home. Stewart Williams Furniture Company also believes in supporting the dreams and aspirations of the young athletes in the Robertson County community whose families have supported them all these years. That is why, when the opportunity presented to partner with KPGFootball on promoting area, young football players in the hopes their athletic achievements would net, for their families and them, a college education and a better life, Stewart Williams said, count on us.

Stewart Williams Furniture Company boasts the best prices on the most recognized and established brands of both furniture and appliances delivered right to you. Call them today at 615.384.7584, stop by the show room, or hit the underlined link, and shop the selection right on line. Stewart Williams has everything to make your house a home. Speaking of someone, or some people, making a home (or homes)…

Some teams either don’t keep individual statistics or don’t post those statistics where access to them is available to those of us in the media wishing to feature players. Truthfully, Tennessee needs to step up its game for all its high school football players and get a site akin to the Riehards Kentucky KHSAA scoreboard, on which 90% of the teams in Kentucky logg their team and individual statistics. MaxPreps permits teams to enter statistics on its site if the team will take the gumption to submit them. One might also consider putting his statistics on his Hudl page.

We say all of that because KPGFootball would love to know how many yards from scrimmage, rushing TDs, tackles, interceptions, and the like 5-7, 145 pound RB/CB Reagan Conquest contributed, in 2018, to the Bobcats’ efforts. From his offensive highlights, below linked, it must have been really prodigious. He explodes off the highlight reel.

Though small, Reagan (who makes the Coolest Name Ever team with Reagan Conquest) is an elusive and explosive ball carrier from out of Greenbrier’s spread attack. Reagan explodes through the first level before they even have time to react. Reagan has plenty of shake to beat 2nd level defenders in space. Reagan then has the separation speed to leave the 3rd level in his dust on his way to the end zone. Reagan is a versatile athlete with plenty of tools in his multi-sport, tool kit as he is also the point guard on the Bobcat basketball team.

Greenbrier will be counting heavily on this returning starter in the backfield when he suits up for his senior year. On film, though undersized, he is one of the better running backs we have evaluated. Have to think this guy suits up on Saturdays somewhere, though at what level we can’t say for sure.

Congratulations to Class of 2020, Reagan Conquest for being selected this week’s Stewart Williams Furniture Company’s Robertson County Player of the Week. Join us next week as we anoint a new recipient.