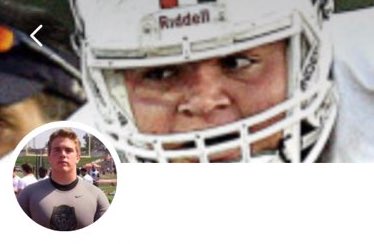 It seemed like this kid just had it all. He had the ideal frame for a tackle at 6-6 and 315 pounds. He had offers pouring in from places like Georgia and Alabama. He had been ranked by the Knoxville News Sentinel as one of the Class of 2020’s top-ten college prospects in Tennessee. Rivals ran right in and rated him a 3-star prospect seemingly sight-unseen.

That’s a bold claim we are making. That a reputable ratings service like Rivals would rank any kid without seeing the first second of film, without having one of their “expert analysts” watch him run the first 40, the first pro-agility shuttle, the first L-cone, the first anything. Surely, we have to be misinformed about that. Rivals just wouldn’t do that…or would they?

He doesn’t exist, at least not as depicted and/or described, according to numerous sources we have accessed prior to writing this piece. Our sources tell us he was a contrivance of some Knoxville-area high school students who created, for their fake prospect, a Twitter account (@carringer2020) and simply began tweeting different “Truly blessed…” tweets thanking schools for offers never extended.

Probably the first clue that old Colonel Mustard here was fictitious was his having only 36 Twitter followers. Had KPGFootball been retained by Rivals to look at a similarly-situated, Kentucky or surrounding area, type player the really low amount of Twitter followers would have been a clue to us something was indeed amiss. Once a player gets ID’d by a school as a target of its recruiting emphasis, the fans of that school begin following that player on sites like Twitter religiously. When the recruit commits to a school the followers go exponentially through the roof.

Up above, we have included the Twitter page of Bryn Tucker (@TuckerBryn) who is a real, live, Knoxville-area, high school superstar from Knoxville Catholic. Bryn really has a Georgia offer, among many, many others, with more jumping on-board all the time. Notice he has 3,116 followers and not the 36 which the fake account claimed.

Not all recruits use Twitter, a lot of kids use Snap-Chat, but we don’t; so, we used our friend’s Twitter page as an example. The really low number of followers on any social media site for what would amount to a real highly sought after prospect should have been a red flag.

That’s not all either. Another way in which the ruse could have been smoked out as opposed to subjecting the site to untold amounts of scorn and ridicule would have been to find the kid’s HUDL-highlights. No 6-6, 315-pound OT who is a target of two schools like Alabama and Georgia is not going to have Hudl highlights. When you run the name “Blake Carringer” in to the Hudl site you get the following:

Notice, he hasn’t the first highlight. According to his Hudl page, he’s a class of 2020 prospect who joined Hudl in August of 2013? Carringer’s listed at 5-2, 160 pounds, which would be a normal-sized 5th-grader. This would indicate Carringer has never made a single entry to this nearly 6-year-old account the entire time it has been active. So, to believe this Blake Carringer is real, one has to believe this prospect hasn’t messed with his Hudl highlights the entire time he has had the account. This too is a red-flag.

Now, we don’t believe this account is legitimate nor do we believe it was opened 6 (or so) years ago. The point being…this isn’t a Hudl-account of an OT holding offers from numerous FBS-level, power 5, college football programs.

There were plenty of other red-flags existing to tell anyone, exercising any amount of diligence, that this prospect’s existence was shady at best and, most likely, completely contrived. That is the real problem, isn’t it? The respective ratings services’ complete lack of due diligence.

Some kids completely (and poorly) fabricate a Hudl page, then fabricate a Twitter page making their ghost the right-size, then tweet-out some dummy expressions of how humbled and blessed their ghost feels for having been offered by some program which doesn’t know anything about any offer being extended to this person and Bam!; we have us a prospect.

There was a scene in a movie entitled How I got into College where an admission’s officer of a fictitious movie college (Ramsey College), in order to demonstrate the fallacy of making all the admission’s decisions based from off of standardized data, created a dummy (or fake) applicant named L.E. Phant. L.E. Phant applied for admission into the next term’s freshman class with what appeared to be excellent numbers.

The applicant was praised by the committee for his GPA, his standardized test scores, and hailed as the exact type applicant Ramsey should be admitting into its illustrious and prestigious college. So, he was admitted forthwith. When he was ushered into the room to meet the admissions committee which was so enamored by him and, particularly his numbers, we learned he was an actual baby elephant.

It would appear here that some ratings services out there, together with a largely circulated newspaper, were all too willing to jump on the band wagon. Owing to the un-researched, completely devoid of dilligence, rush to judgment, they have all been Ramsey’d, if you will.

There’s nothing wrong with being in love with college-ready frames. There’s also nothing wrong with insuring, before an institution throws tuition money at a prospect, that the prospect can actually play the game of football with his perfect frame. At the very least, services should make every effort to not be so easily duped into promoting some contrived fraud into the next superstar based simply on measurements, which is obviously what was done here.

The problem with these rating services is people are paying good money to read expert-analysis about players they are (rightfully) expecting to have been both researched and evaluated. Hard to argue you aren’t ripping off your subscribers where you have so obviously fallen for some sophomoric, B-rated, movie-gag perpetrated by a bunch of high school kids intent on teaching you the same, hard lesson once taught an admission’s committee at a fictitious movie-college.

What Rivals appears to have fallen for, in this instance, seems even worse than the Ramsey College admissions committee’s being fooled. With the movie’s Mr. Phant, there is no evidence to suggest the baby-elephant wasn’t actually both smart and very accomplished for a pachyderm of his tender years. At the very least, unlike Blake Carringer, L.E. Phant was a living, respirating being.