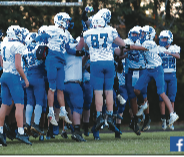 Friday nights’ ball-game with Middlesboro on The Riverbank figures to be a contested matchup where the stakes just really couldn’t be much higher, especially with both teams playing just its third game of the season. We are going to break down the matchup for you, right here, applying in-depth, statistical analysis you will only see in the Jackson Times-Voice.

Here is how we see this match-up unfolding and exactly why. At the end we will tell you who we believe will win and even what the final score may be.

Middlesboro is a very well coached football team headed up by legendary coach Larry French. Coach French’s career record over 42-years is 330-166 and his career winning percentage is 67%.

French is 2-1 in State Championship games, winning back-to-back titles at Boyle County (4A) in 2009 & 2010. He coached Meade County to the Class 4A state title game before losing to Bell County in 1991. French has won his region 6-times and has won numerous post-season coaching honors, including several Kentucky state high school Coach of the Year awards.

French led Middlesboro to an 8-4 record in 2019, in his first season at the helm. Middlesboro was 1-10 in 2018, the year before he was hired away from Southwestern in Class 5A.

Head Coach, Kyle Moore, is the reigning Class 2A, Kentucky Football Coaches Association’s, 2019 Coach of the Year. He was also his district’s Coach of the Year too. Last year, was his first Regional Title since taking over as Breathitt’s head man. Make no mistake about it, Breathitt is an exceedingly well coached team too.

Kyle Moore is in his 7th-year as a head coach and is coming off a 13-1 year. Coach Moore endured 4-consecutive 4-7 years with the school being managed by the commonwealth. He has sure turned his alma mater around since.

EDGE (slight): Middlesboro (there aren’t too many programs around who would edge out Larry French in the “coaching” category with what he has done in his career, just to be fair).

Passing: Eric Helton is the leading passer for a Middlesboro offense which hasn’t shown it can throw the ball very well or effectively, thus far. Helton wears number 10 and is 4 for 11 on the year, through two-games, for 37-yards with neither a thrown TD or interception.

Passing: Jaylen Turner, 23 for 41 for 431-yards passing and 6-TDs against 2-picks. Jaylen Turner is a super-star in the making at the QB-position.

Intangibles which could throw the game Breathitt’s way: Weddle, an honorable mention All-Stater a year ago (AP), is 6 for 7 on PATs and leads the team in scoring with 44-points (4 rushing TDs, 1-TD receiving, 1 pick-six, and 6 PATs).

Offensive Line Play: The Big Blue Wave is set to get Teegan Smith back off quarantine Friday night. Last game out, The Wave, even without Teegan Smith, cleared a path for the Bobcats to gain 277-yards rushing in only 18-carries with 4-rushing TDs. The captain of the offensive front, center William Long, is a two-time, first-team All-Stater (AP).

Breathitt also beat Powell County 50-8. PoCo, as they are commonly called, is a Class 3A, District 6 team which has beaten both Prestonsburg and Lewis County and stand at 2-1 on the young season.

We have already discussed Mr. Weddle. There are at least two other intangibles which should play in favor of the home team. One, this will be the first opportunity for the home folk to get to see the home team. Second, The Riverbank, is a real hard place to play.

Then there is the psychology of the matchup. What we mean by that is simply the following, the last two times these two have played, Breathitt has won both games by a combined score of 105-22.

Projected final score: We like Breathitt County in this game 48-21.

Other projected scores from around the KHSAA…

Anderson County needs a win the very worst way. New coach Mark Palmer is finding high school football to be less hospitable than it was for him in one of the “other” commonwealths (Virginia). He still has Darion Dearinger, Kentucky’s best DE. Collins has plenty to offset that one player.

Both of these teams enter this ballgame in Scottsville, Kentucky riding high. Danville is undefeated and has beaten a Hazard team we aren’t sure about this year but one which is generally a really tough customer. ACS has beaten Franklin-Simpson, and soundly, something it rarely does ordinarily. Class 4A, 2nd-District is 2-1 with its only defeat a narrow opening night loss to Glasgow. We believe Coach Clevenger will steer his Admirals to victory on the high seas this Friday!

The Comets are a team everyone in the commonwealth is talking about and Leetavious Cline is now getting mention as a “Mr. Football” candidate by major, Kentucky-wide publications. Rushing for nearly 200-yards a night will do that for a running-back.

Clay County has been known to be a pretty tough out in the Kentucky high school football world. They are 2-1 on the young season having beaten both Lynn Camp and Leslie County but dropping its 3rd game to a tough Harlan County squad. If Clay County thought that Harlan County team was tough, wait until they get a dose of what Coach Jim Matney has cooked up for them!

This match up pits two of western Kentucky’s better 6A football teams and Daviess County showed in its game with Owensboro Senior, to which it lost but by one score, that it is an opponent with which to be reckoned. McCracken, to us at KPGFootball, is one of the more talented teams in all the commonwealth and is coached by one of Kentucky’s elite play-callers and offensive geniuses in Coach Marc Clark.

This game could have huge implications on the playoff picture, particularly on where and which team is still around when round four gets here. Mayfield is always a threat to win it all but they haven’t looked much like Mayfield this year, if you are catching my drift. Caldwell County looked like warmed-over crapola against a Hopkinsville team which went, the very next week, and dropped a road game to lowly Calloway County. If this game were being played in Princeton, instead of Mayfield, we might be very well picking differently. However, the game is being played at Mayfield. If there is a likely upset this weekend, circle this one. These teams are not altogether different talent-wise.

This was last year’s district championship game in Owensboro and McLean coming out of that contest advancing to the Regional final was a shock to just about everyone. I have talked with some of the Owensboro Catholic coaches and they tell me Catholic will be much better prepared this go-around. I suppose this is something we shall have to “wait and see.” Both of these two teams still must contend with Hancock County which has the best football team it has fielded in quite some time, sitting at 3-0 with a trip to Todd County Central looming Friday night standing between Hancock and a 4-0 start at the mid-point of the season.

We got to watch, live, Ashland Blazer on the road at Bourbon County this past weekend. They were impressive. They head to play another tough opponent and, once again, on the road. These Tomcats will sure claw you if you aren’t very careful. The Rams will learn, Friday night, it isn’t the least bit immune to “cat-scratch-fever.”

Rockcastle is really playing well this year especially with Noah Parkey at the reins. The Rock’s only loss is to a Letcher Central team which is really playing well. Bell County got shelled in its opener with Johnson Central but hasn’t lost since. Coach Hilton’s boys from Pineville, Kentucky better take Rockcastle County seriously or they may find themselves between the proverbial “Rock and a hard place” Friday night on the road. If there is a likely upset this weekend, circle this one. These teams are not altogether different talent-wise.

Well guys, these are the games we decided to predict this weekend. It should make for exciting football and lively social media conversation across the commonwealth. We will try to continue to do this as the year progresses from this point forward.