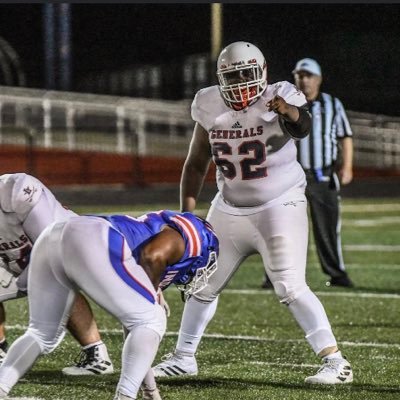 Tayden Mackey is a flying under the radar big who should be fetching considerable attention. By big, what do we mean? How about 6-3, 325-pounds of big.

I remember coaching offensive line once and a player of mine who was very ballyhooed along the offensive front was having a hard time digging a big guy like Mackey out of the hole in practice. I was yelling at the kid when he looked at me and said, “Coach, he’s HUGE!”

He certainly was. That brings up an important consideration which has to be considered by any and all opponents aligned across from the “Tayden Mackeys” of the football world…Mass is mass. Mass has to be dealt with, but it isn’t going anywhere without considerable effort and technique.

Three hundred and twenty-five, hard-charging pounds won’t stop itself and its downhill run at your player has to be stemmed somehow. What was that law of physics about things in motion staying in motion?

Mackey is a guy who is solidly built, in spite of what one may expect to find in a player his size. He uses his hands well and when he locks on, he’s got you.

We like the way he runs his feet through the whistle particularly when the defensive guy gains even with him in an upfield pass-rush. We used to tell offensive linemen that when a DL presents his side to you, you’re now a drive blocker. Just lock on and take him for a ride away from the passer. Mackey appears to have been told the same thing.

We also like that 3.4 GPA. Grades like that open lots of doors for prospects like Mackey which are unavailable to the average kid. Look for the Ivy-Index programs to try to get involved here.

If Mackey were to call us and say, “Hey, on what should I work to get better(?)” we would tell him to work on basically two things. He needs lots of offseason ladder work (running the rope-ladder, though few of them are actually still composed of rope) and get in the gym with his private coaches and work on gaining explosion and core strength.

If he could bring his pad level down to where you want to see it and fire out (instead of up) and then “bring his feet,” he would have something. We love his frame, we love his strength and power, we would like to see him quicker, more explosive, and playing with lower and better leverage.

This is a solid investment for a college program to take, train, and reap the considerable reward there for the harvesting for any staff clever enough to see the possibilities. Can’t coach 6-3 with length. Can’t coach mass. Mass is mass, as my former player would have been happy to relate to anyone willing to listen to excuses.