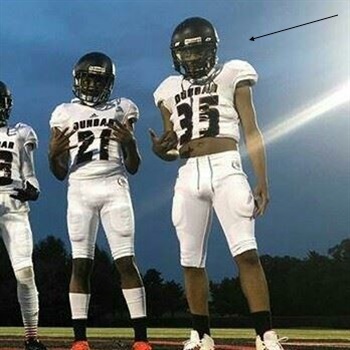 There are plenty of stars on the Paul Laurence Dunbar football team. We have before featured them. We have preseason selected Dunbar one of the premier programs at its level of play in Kentucky (6A).

It may sound like empty hyperbole when we say it, that lots of programs are sleeping on Drew as a football prospect; but, believe us, it is a fact (certainly in our opinion anyway). How else can you explain his having the frame he possesses, the athletic skills he exhibits, and yet his name not being among the “household names” listed on college “hot boards” detailing “hot commodities” boasted about the commonwealth in its ’22-class of prospects?

We don’t have a ton of OLB/WR prospects in Kentucky, at any classification of play, with his dimensions, length, and athletic skill set. As we will below detail, he “looks the part.”

Drew lists two positions as “home” on the Dunbar roster. The Bulldogs played him over his 10-games of action in ’20 at both WR and OLB. Drew had 9-receptions for 100-receiving yards on offense. Drew registered 7-tackles and an INT on the defensive side.

We admit this production is pedestrian, or “dime a dozen,” if we’re being fair. However, sometimes it is not what you do but when you do it.

Drew’s interception came at the most opportune time a year ago. Drew made a game-saving interception, and the Dunbar Bulldogs held on to defeat the Bryan Station Defenders 21-16, enabling Dunbar to win its first region championship since 2003.

We call that rising to the occasion. Colleges look for players who do this.

Drew, going back to the ’19 season, was primarily a defender. Offense was kind of added to the arsenal in ’20.

Drew is an “easily passes the eye-test” prospect. He is 6-5 and weighs 210-pounds. His 40-yard dash time has been timed at 4.60. This kid is fast enough to play OLB and WR or he can add about 30 or so pounds of “good weight” and play DE or TE at the college level.

Drew has a solid 3.0 GPA, a statistic becoming more and more important in today’s recruiting. More and more, schools want to package academic and athletic money, together, to get a player fully and properly funded.

Drew is a two-sport athlete at Dunbar. He also plays basketball.

Looking at where he figures, next level, it is fairly obvious Drew’s football skills are yet unrefined. It appears clear to us his “best football” is still ahead of him. We expect he will have a big year in ’21 and matriculate to college either as a football or basketball prospect. He has a high ceiling in either.

We see him as a defender in college football. We also think he would be encouraged to “Red Shirt” at some programs, put on the weight, and come back in ’23 as a hard-charging DE/passing rushing specialist.

That would be our plan with this prospect. Then again, what do we know?