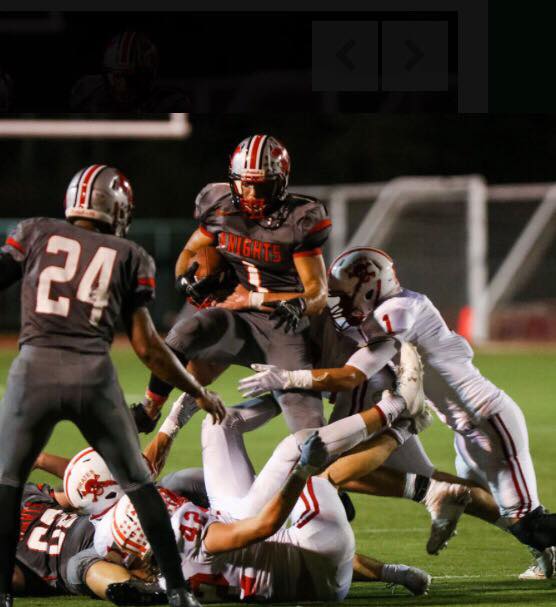 I wrote an article about the best linebacker in Kentucky in the 2021 Class. You may remember it. The article was entitled, Who’s the Best Linebacker in Kentucky’s 2021 Class?, and it was published August 30, 2017. In that article, it was my position the best LB in Kentucky’s 2021 Class was Austin Gough, but narrowly. Austin, who is among the leaders in tackling for the Owensboro High School’s 5A Defense, has certainly played up to his immense billing. Well, several people across the Commonwealth of Kentucky took issue with me, which, of course, one is free to do. The Ballard people said what about Justice Thompson? The Leslie County people said what about Preston Spurlock? The Belfry contingent said what about Seth Mounts?  Well, it’s not like those players went unconsidered. Allow me to jog your memory. In August, I wrote the article detailing Thompson and Gough and gave the slight edge to Gough. But, it isn’t like I didn’t mention Spurlock and Mounts about whom I said the following…There are plenty of fantastic LBs in the 2021 Class who are starting Varsity at their respective schools. There’s Preston Spurlock starting at MLB for Leslie County and Seth Mounts, who was running first team at Belfry until injury shelved him, at least temporarily. Emphasis Added. At the time, Seth had suffered a dislocation from which he has now returned.

Seth Mounts has been playing the past four games for the perennial powerhouse in the 3A Classification in Kentucky High School Football. For those of you who think it is easy to crack the starting line-up at a 3A school in Kentucky, I am told Seth Mounts, and Greyson Cook, (2020), who started at DE last year as a freshman, are the first freshman to start for Belfry since 2002 when Cole Bentley, Cameron Catron, and Ray Horton accomplished the feat. Neither Cook nor Mounts have found the field because there is a shortage of talent playing for the Pirates. There are older players moving aside who, themselves, would be fine players almost anywhere else.  Young Plug-in players like Cook and Mounts find the field because they are better than what is returning at the respective positions. So, how’s the 6’3″ 190 Mounts doing since coming off injury and being inserted into the lineup at LB? How does 32 tackles with 6 Tackles For Loss sound to you in four games? Yeah, sounds pretty damn good to me too.

Here’s the simple truth. I alluded to this back during my Plug-In Player Series, Part 2, which I published on this site August 8, 2017. Middle Schoolers are coming up bigger, faster, and stronger than we have ever before seen them. If you are an upper class-man who thinks he has his position locked alieviating the need to continue to make off-season progression…better re-think this. Not to toot my own horn, but on August 8, 2017, I correctly predicted about Seth…plays for one of the best programs in the Commonwealth of Kentucky High School Football in the Belfry Pirates. I referred to Seth as a…gangly prospect with outstanding length, ball skills, and a frame which can hold a lot more bulk and weight, and likely will. I specifically noted Seth’s excellent pursuit, tackling, and coverage skills and the upper body strength to scrape down the line of scrimmage and make plays in the run game. Sources we consulted from Belfry tell us that Seth is pushing to start…Even if he doesn’t start initially, it won’t be long into his initial campaign before he sees the starting lineup…All we can say at Kentucky Prep Gridiron is…Bingo!

When selecting the best LB in the 2021 Class, I will stand by my Austin Gough selection, but, then again, who the Hell am I? Well, I am certainly not Philip Haywood. You see, Seth Mounts plays for a legend who is in his 43rd season and has a 423-130 record over that span, winning the last four consecutive Class 3A Kentucky Football Championships and his 6th overall. As of today’s date Coach Haywood’s Pirates are undefeated in the Commonwealth of Kentucky and 6-1 overall with its only loss being to Huntington, West Virginia, to open the season in the Pike County Bowl. There are programs which transcend its Classification. Mayfield, for instance, and the Paducah Tilghman teams of the 80’s and 90’s. Belfry is one of those. They don’t just play good football for Class 3A, they just play good football.

So, in the end, who is the best at linebacker in the 2021 Class is debatable. It might be Gough or Thompson or Spurlock or Mounts or someone of whom I have yet to hear. It is a fun debate, the outcome of which will not be fully known for years on down the road. The bottom line here is that young Seth Mounts, who works as hard as any kid in the Commonwealth, is coming into his own. Through hard work and ability he has inserted himself into such debates and discussions. For those of you out there who hope to compete with him, better get to work, as he isn’t allowing any moss to grow on his stone, so to speak.