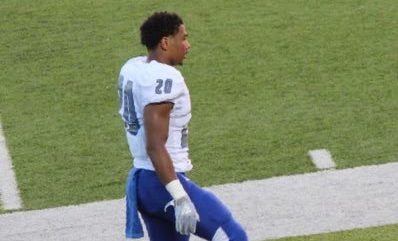 Coach Dan Woolley’s Eagles have a motto which seems particularly poignant when considering some of the players who have been matriculating through the Scott High School football program. That motto is “Soaring Above the Rest.” The Eagles have been playing up to the motto, having just completed two solid seasons in succession, 8-4 in 2017 and 7-5 in 2018. Scott High has won 7 of its last 8 district games over the same two-year span, making them pretty much the “bullies on the block” in the 7th district of the 4A classification.

An excellent reason for the success has to be attributed to Quincy Perrin, who is a running back of whom you may not have heard but a name familiar to college coaches recruiting Kentucky, let KPGFootball assure you. Dealing with Mr. Perrin has been quite a problem for the 7th district and it isn’t a recent problem either.

Perrin showed immense potential, when only a freshman, in gaining 445 yards on 70 carries with 4 rushing TDs back in 2016. Then, in 2017, Perrin exploded onto the scene with 1,441 yards rushing, in 164 carries, and 16 rushing TDs. His sophomore performance served notice there was a new “Sheriff” patrolling the offensive backfield in the 7th district for Scott County High School.

This past season, in 2018, with the “secret” out, and pretty much all twelve opponents “game planning” to stop Quincy, he carried the football 212 times for 1,392 yards rushing with 19 of the team’s 31 total rushing TDs. He also caught 8 passes out of the backfield for 106 receiving yards and 2 scores through the air. Perrin accounted for 132 of Scott High’s 299 points scored for the entire year. Yes, for the mathematically inclined, that does correlate with his being personally responsible for slightly over 44% of the team’s total scoring in 2018. Forty-four percent (44%) of the scoring coming from just that one player. Sorry, we found that so astounding we decided it was worth of some redundancy.

In three years for the Eagles, with one more trip around the classification to show off his “soaring” abilities forthcoming, Perrin has gained 3,278 yards in 446 carries with 39 rushing TDs scored. Perrin has average 7.35 yards per rushing attempt, over the three years, and has scored a rushing TD every 11.44 times he has carried the football. Looks to KPGFootball like this particular Eagle is flying high!

Perrin has an almost ideal frame to play running back at 5-10 and weighing between 190 and 200 pounds. Now, in the interests of full disclosure, Perrin lists SS as one of his positions and, with his frame, we can also see him playing in either the defensive 2nd (OLB, 4-3 base) or 3rd level (SS, or even a “Jack”) in college. To date, Perrin’s primary deployment has been on offense as his defensive stats would attest (4 tackles and a recovered fumble in 2018).

That aside, the football star, who doubles as a track athlete at Scott High (11.55 PR, 100 meter fully automated time, approximately a 4.73, fully-automated, 40 yard dash), has both the speed and quick-twitch explosion to burst through the line of scrimmage and separate in the open field. You probably have surmised that from his 39 career rushing TDs, scoring every 11th or so times he has touched the ball over a three year period. If that particular statistic doesn’t support that particularly theory then which statistic would you imagine would?

Quincy Perrin is dynamic, quick, explosive, and fast. He runs behind his pads well with good “lean” as his film (above linked in blue) will attest. He has “Soared Above the Rest” thus far, with one season yet to go. From where KPGFootball sits perched, this particular “Eagle” looks set to take flight again over his senior season.