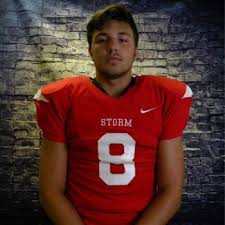 There were some impressive performances this past Friday night, at least one of which was in a losing cause. Still, the weekend was filled with primetime matchups and performances to match. Below we will detail a few of the outstanding games turned in by some of Kentucky’s top high school football players.

The following were some of these performances. One of the games turned in below, William Long, is ineligible for the jerky this week from Mingua Beef Jerky Company as we don’t want to award the distinction to the same player consecutively. That being said, let the “race for the world’s finest beef jerky” commence.

We think of junior, Anthony Johns as an offensive lineman only. He is, after all, one of 2022’s most coveted interior offensive linemen in the commonwealth of Kentucky. Well, turns out the two-way player for 2A’s best football team can play on either side of the line of scrimmage.

He turned out his usual accoutrement of pancakes Saturday night against DeSales. In addition to what he did along the offensive front, Anthony Johns, played well defensively too. Johns was credited with 3-sacks in the win over DeSales.

Tyler Morris, who also plays for LCA is widely considered among the best 2nd or 3rd level defenders in all of Kentucky. I say 2nd or 3rd level because he has the athleticism to play safety or even corner with the physique to play OLB. Morris registered 10 tackles, 1.5 sacks, and 2.5 TFLs in the huge road win over DeSales playing along side Johns.

Freshman, Austin Sperry, 6-3 175 pound WR/DB, may have had the most impressive opening night act of any freshman in the commonwealth. One of the commonwealth’s most coveted, 2024 basket-ballers, showed those attributes transfer to the football field quite admirably. Breathitt’s freshman phenom caught 7 balls for 177 yards and 1 TD. Solid performance for a freshman’s first varsity game on the road or anywhere else for that matter. Breathitt beat a game Estill County, 60-43.

Junior QB, Jaylen Turner had a pretty solid night too for the Bobcats. Turner was 18 for 32 for 327-yards and 3-TDs while churning out 45 yards on the ground and adding 2 TDs rushing. Accounting for 5-TDs on the evening isn’t too bad for the QB rounding into one of 2022’s very best prospects particularly at his position. Like Sperry, he too, is a coveted basket-ball prospect.

QB Adran Stringer, featured photograph, is a statuesque 6-4, 230-pounds. The statue he casts looks as much like a linebacker as it does a QB. Make no mistake, the Herald Hundred member is quite the QB.

In a losing effort against Todd County, Stringer threw for 386-yards, on 23 for 40 through the air, with 6 passing TDs. He passed Mike Evans on the career completion’s list at Central.

Evans, a former Todd County QB considered one of the program’s very finest, played collegiately at Kentucky Wesleyan. Presently, he is on the Todd County coaching staff, coaching QBs. Evans was just passed on the all-time completions list by his protégé. No one is happier for Stringer than the man whose mark Stringer just surpassed. Can’t write it any better than that.

Mr. Football candidate Isaac Dixon (2021, photo to the right of this paragraph) carried the football 14 times for 194-yards against 5A Pulaski and had 300-yards of individual all-purpose yards on the night. The Defending 3A State Champs beat the Class 5A power, Pulaski, 33-13. Dixon, coming off a dominating performance in last year’s 3A title game, is demonstrating he is a one-man offensive band which just can’t be contained, even by prestigious 5A programs the likes of Pulaski County.

Hoptown wide-receiver and recently anointed Mr. Football candidate, Reece Jesse, Jr. (2021), a top-50 prospect in Kentucky listed on the recently released Herald Hundred, only caught 2-passes all night for the Tigers, out of the 6 passes completed by starting QB, Tre Jefferson. However, looks can be deceiving, or so I have always been told.

Both of Jesse’s receptions were for TDs. His yards receiving total of 112 was not too shabby either. Sometimes, it isn’t how many plays one makes but what those plays contribute to the outcome.

Not many people expected too much out of Christian County this season. We didn’t count among the throngs writing off the Colonels, 5A, District 2, as we hinted at this upset in a day game Tweet (@KPGFootball) published hours before the game kicked. Christian County’s L’Ray Coleman had a huge night helping snap the Colonels’ 15-game winless streak.

Coleman, a 2021 RB prospect, carried it 23 times, gaining 204 yards from scrimmage with 2 rushing TDs. What made this even more impressive is he did this against a Madisonville North-Hopkins team coming off a Class 4A, semi-state appearance. Where did they play? Madisonville…

Christian County’s, Cyrus Greenwade had a big night too. The sophomore DB picked off two Maroon passes, taking one of them back for a pick-six, to help the Colones get off to a 1-0 start with the 28-20 win.

Dual threat QB, Braxton Baptiste from Logan County had a huge night rushing and throwing the football for the Class 4A team which blasted Russellville (1A) Friday night 29-7. Baptiste, a senior threw for 155-yards with 2 TDs and ran for another 138-yards on 13-carries with a rushing TD.

Finally, and while last, certainly not least, Dillon Preston, a senior RB/DB for Johnson Central carried the football 18-times for 147-yards rushing with 4-rushing TDs. Johnson Central beat 2019, 3A finalist, Bell County, at their place 36-0 on Friday night. Coach Dudley Hilton’s lads aren’t accustomed to having the clock run on them, especially not at home.

So, it will be a down to the wire proposition for who gets the Mingua Beef Jerky Company’s prestigious distinction for this week. That article will be this coming Wednesday.

As for last week’s recipient, Class of 2021 William Long from Breathitt County, Long had to go to the ER in the second half of the game to get IV administered for severe cramping. Long is fine and will be in the Morgan County game upcoming. Hopefully he will be better hydrated than last week.

Anyway, Long had 4-tackles from NG, fighting doubles every snap, and registered a pair (2) of TFLs. Long also registered multiple pancake blocks at his center position where the Bobcats were up 34-13 at the half with Long available for action. Long made it 2-snaps into the third quarter before suffering severe cramps necessitating the trip to the ER. Without Long, Estill outscored the Bobcats 30-26. Talk about your tale of two halves.