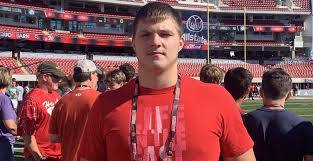 There were some impressive performances this past Friday night, at least one of which was in a losing cause. Still, the weekend was filled with primetime matchups and performances to match. Below we will detail a few of the outstanding games turned in by some of Kentucky’s top high school football players.

The following were some of these performances. Adrian Stringer, is ineligible for the jerky this week from Mingua Beef Jerky Company as we don’t want to award the distinction to the same player consecutively. While we want to spread it around, we will from time to time as the information is available to us update the reader on what former winners of the award have done in subsequent weeks. That being said, let the “race for the world’s finest beef jerky” commence.

We think of junior, Anthony Johns as an offensive lineman only. He is, after all, one of 2022’s most coveted interior offensive linemen in the commonwealth of Kentucky. Well, turns out the two-way player for 2A’s best football team can play on either side of the line of scrimmage.

He turned out his usual accoutrement of pancakes Saturday night against Lexington Catholic and completely shut down the A-gap in LCA’s 24-20 win over their cross-town parochial school annual battle. In addition to what he did along the offensive front, Anthony Johns, played well defensively too. Johns was credited with 4-tackles along the defensive interior, where the doubles run rampantly, in the win over Lexington Catholic.

Darion Dearinger‘s performance was just sick this past Friday night. Not as sick as he was to see his Anderson County team lose to Harrison in a squeaker 25-22, but none of the fault can be lain at the feet of the commonwealth’s best Defensive End in high school football. Friday night, with Harrison County running away from Darion as hard as possible, Dearinger had 19-tackles, 4 TFLs, and 1 QB-sack. He threw in 7-QB pressures and registered what was described to us as “tons of pancakes” on the offensive side of the football where he plays TE.

Junior QB, Lincoln Clancy had am awe-inspiring night for Owensboro Catholic team which is way better than most people thought they would be entering the year. Clancy was 7 for 10 passing, for 263-yards, with 4 TDs. Owensboro Catholic beat Class 4A Hopkins County Central 56-6.

Hunter Bradley a Class of 2021 RB from Class 6A, District 1 heavyweight McCracken County, had a huge night for his team as it moved its record to 2-0 on the young season. Bradley only registered 11-carries on the entire evening. In spite of the limited number of opportunities, he still gained 140-yards and scored 2-TDs on the ground. McCracken County beat Marshall County 57-0.

Talk about your big performances from a guy with limited opportunities, what about Lane Weddle from Breathitt County’s Class of 2021? Weddle, a returning Honorable Mention All-State performer from a year ago (Associated Press), only got 4-carries. However, in those four carries, he gained 133-yards rushing and scored 3 rushing TDs. In the passing game he caught 2-passes, one of them for a score, for 32 receiving yards. Breathitt County traveled to Stanton, Kentucky where they laid it on PoCo, 50-8.

Previous winners: As of the time of going to press, we have no idea what Adrian Stringer did in the game against Owensboro Catholic statistically. Hopkins County Central wasn’t in a hurry to log their statistics on the KHSAA website this week and understandably.

William Long, Class of 2021 OL/DL from Breathitt County continued his strong play particularly on the defensive side of the football. Now William’s play at offensive center, where he is a two-time Associated Press All-State first-teamer, can never really be taken for granted. We are sure the coaching staff at Breathitt County would agree Long is Kentucky’s consummate player at that particular position in any graduating class competing in Kentucky’s high school ranks. His defensive prowess, easier to measure statistically, has really shinned brightly thus far.

William had 11-tackles Friday night (9 solos, 2 assists) with 2-TFLs, bringing his season total to 4-TFLs in a game and a half. Maybe most impressive was the huge fourth down stop he made against Powell County on 4th and 18-inches. William blew through the lead blocker to tackle the RB for a loss gaining for his team possession of the football and halting a deep drive into Bobcat territory.

So, it will be a down to the wire proposition for who gets the Mingua Beef Jerky Company’s prestigious distinction for this week. That article will be this coming Wednesday.