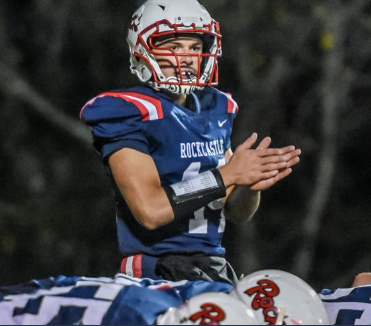 There were some impressive performances this past Friday night but one which just absolutely stood alone. Still, the weekend was filled with primetime matchups and performances to match. Below we will detail a few of the outstanding games turned in by some of Kentucky’s top high school football players.

Darion Dearinger, is ineligible for the jerky this week from Mingua Beef Jerky Company as we don’t want to award the distinction to the same player consecutively. While we want to spread it around, we will from time to time, as the information is available to us, update the reader on what former winners of the award have done in subsequent weeks. That being said, let the “race for the world’s finest beef jerky” commence.

Just don’t know exactly what to say about the performance of Pikeville’s Zac Lockhart other than, wow! The Class of 2022 performer, who is 6-1, 180-pounds and, perhaps, that class’s finest receiver in any classification, Kentucky-wide, not named “Vinny Anthony, Jr., had an “all-time” night against 6A Henry Clay. Lockhart helped lead his 1A, Panthers, to a 58-41 victory in Lexington, KY but that doesn’t even begin to tell the tale.

It would be hard to conceive of a performance from this past weekend surpassing this one. We never do this in this article but this would be a safe bet to be the King of the World’s best Beef Jerky for this week anyway. Word to the wise…

Lockhart caught 17-passes (tied for 3rd all-time), for 388-receiving yards (new state-record) with 7-receiving TDs (new state-record). Trigger man, QB Isaac McNamee, had to have had quite a night too. We know he completed, at the very least, 17-passes, for 388-yards, and 7-TDs if he targeted nobody but Lockhart all night long.

This is the first time we have mentioned a head football coach. We aren’t sure a coach will ever win the beef jerky as the award is really for players, but this guy here accomplished something nearly as noteworthy as the guy who figures to ultimately win this week.

Chris Champion, head football coach of the Calloway County Lakers, led his team to a 14-7 victory over Hopkinsville High School for the first time since 1994. Entering the night, Hopkinsville was a 41-point favorite in the game which was played at Calloway. The CalPreps.com computer algorithm had Hoptown beating Calloway, 48-7. Well, computers don’t now everything.

He has Calloway sitting at 2-1, with a home date with Murray High School upcoming. Champion and his staff devised a defensive scheme which, somehow, limited superstar WR, Reece Jesse, Jr., to only 3-catches for 32-yards receiving with no touchdowns. Champion’s charges held Hopkinsville to 7-points fresh off the Tigers having consecutive weeks of 27-points scored on 6A, Henderson County, and 54-points scored on Caldwell County, a ranked 2A team at the time.

Some people around Kentucky are calling it the biggest upset in Kentucky high school football history. We don’t now, that may be a bit overstated, but it was truly remarkable!

Senior athlete/running-back/defensive back, Isaac Dixon with Belfry had another “Mr. Football” caliber outing, something which has become commonplace for this particular prospect. Against Maggofin County, the 2021-“jack of all trades and master of many” accumulated 380-all-purpose-yards in a performance which would have been jerky & T-shirt worthy in any other weekend but this past one.

Dixon carried the football 8-times, gaining 255-yards. He scored 4-rushing TDs. He had 35-receiving yards, and a TD-reception. He had a 90–yard kick-return for a TD, making his TD contribution for the evening six (6). Just imagine what his numbers would have been had he played more than one-snap of the second half. Yessir, mind-boggling!

Like we said, any other night but for the night Zack Lockhart has the game he had, this “other” kid from Pike County takes the award Wednesday. Must be something in the water around Pike County.

Junior QB, Lincoln Clancy, from Owensboro Catholic was very efficient in his performance this week. He would have been a strong jerky candidate on a “normal” weekend. Catholic beat Todd County Central 43-14 this past Friday night.

Clancy completed 8 of his 10 passing attempts for 152-yards and 3-passing TDs as Owensboro Catholic “aced” Todd County Central’s “Rebels.” See what we did there? Yeah, that is why we make the big money, because we are clever!

Three LCA players caught our eye this week. Junior, Drew Nieves, had a huge night for LCA in its win over Williamsburg at QB. Nieves threw for 267-yards and 3 scores on 11 of 18 passing with no picks. Mattie Lebryk (Senior linebacker) had 7-tackles, 2-TFL, and a sack to pace the defense. Xavier Brown (Sophomore athletes) caught 2 passes for 114-receiving yards and 1-TD for LCA.

Noah Parkey (Sr.) had himself quite an evening for Rockcastle County as they beat Garrard 53-20. The dual threat QB and son of head coach, Scott Parkey, ran the football 11-times for 190-yards and three rushing scores to go along with the TD he threw on this way to accounting, personally, for four of the team’s TDs. Isaiah Didelot (Sr.) had 7-tackles, 2 TFLs, and 2-sacks for the defense.