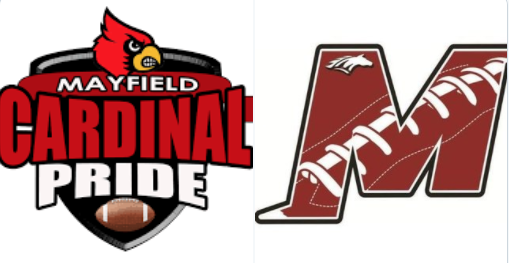 Two top ten teams, one in Mayfield (No. 3, 2A) will play McCracken (No. 8, 6A) at McCracken County Friday night with implications reaching both classes

In most states or commonwealths it would be simple. How in the world is the team preseason picked 3rd in the 2A classification supposed to stay on the field, on the road, at a high school picked 8th in the commonwealth’s largest classification (6A)? Well, fans of Kentucky’s version of high school football knows things aren’t always that simple. Good teams are good teams in Kentucky up and down the 6-classes. Preseason, Mayfield is picked Kentucky’s 30th best team and McCracken its 33rd, overall regardless of class. So this is an evenly matched game, make no mistake. Here’s how we see the matchup.

First, for the visiting Mayfield Cardinals:

The Cardinals were 13-2 in 2019. They lost on virtually the game’s last play in the 2A title game to Somerset and lost 45-35 on September 13, 2019. The Cardinals, after losing early to McCracken at home, reeled off 10 straight before losing in the championship game 34-31. They are projected to do very well this coming year and are preseason ranked 3rd in the 2A classification entering the season. The Junior Varsity was 6-1 in 2019, for reasons which will be explained later, this is a key statistic. Mayfield strengths are returning big time running back, having two returning defenders among the 5 coming back like Jax Rogers and Tre Arnold, and just always expecting to win championships and football games because they are Mayfield. The weaknesses are having to replace a QB which may have been top-three in the entire commonwealth a year ago and is now playing Division I, college football, losing one of Kentucky’s most dynamic receivers, and the personnel losses suffered, particularly along the team’s offensive front.

Kylan Galbreath, recently named to the Herald-Leader Hundred, had an outstanding season in 2019, He carried the football 190-times for 1,575 rushing yards with 18-TDs scored by land.

Next, the home-standing McCracken County Mustangs:

McCracken County was 9-4 in 2019 and played for the Regional Championship in 2019. They lost their first two to Paducah Tilghman and Bowling Green and then reeled off 9 of the next 11. McCracken’s JV team was 5-2 in 2019, but that statistic isn’t as important to McCracken with 6 offensive returners and 8 returning for the defense, as it is to Mayfield. Many of those JV players are about to be pressed into action for Coach Morris’ charges this coming season. McCracken County’s team strengths are the 8 returning defensive starters, the experience along the offensive front, and a big-time RB returning. Its weaknesses are replacing a three-year starter at QB, replacing its defensive leader, and replacing its top down field target from a year ago.

Top Returning Players: 6 on offense and 8 for the defense

Leading receiver from 2019: No

Leading defender from 2019: No

While he may not have been the leading defender in 2019, 6-4, 190-pound Keiron Perez is a holy terror who has incredible length and at 4.62 in the 40, enough speed to cause considerable damage on the defensive back-end.

Blakley Miller, a Herald-Leader Hundred selection, is a 6-6, 295-pound senior offensive lineman who clips off 40s in the 5-flat range (5.05). If you like them long, lean, mean, mobile, agile, and hostile, Miller is your guy.

On a neutral field: According to the algorithm we regularly consult to help in our analysis of such things, Mayfield would be expected to win by a single, solitary point on a neutral field. As far as what the home field is worth, we don’t know what the capacity rules and social distancing requirements will be for Friday night but we are fairly sure it will be difficult as heck to get anyone to follow them.

Odds makers: If we were making book on this game, we would be giving the home visiting Cardinals 3-points in this game. We would get a ton of betting action from Graves County, Kentucky too.

KPGFootball predicted final score: We like McCracken in this game early in the year and at home. Largely because McCracken returns a more veteran group who should be better prepared for this game this early than a team with only 7 of its 22-regulars from a year ago returning and the limited practice time the pandemic has necessitated. McCracken 38 – Mayfield 28, that is how we see it.