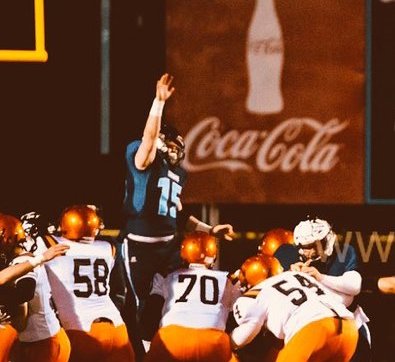 We have before written about the concept of being a football player. This is a term which often is hard to either describe or define but football people believe themselves capable of both spotting and identifying one. KPGFootball would define the term as a player who, simply, both performs well wherever he is deployed and, at the end of the day, makes any team he’s on a better team for his having been on it. there really is no doubt at all, to any of the football people around western Kentucky that Zach Yates is a damn football player. Since coming on the scene in junior pro, to his ballyhooed stint playing Middle School football, to his first two years in the High School lineup at Logan County High School, which, incidentally, has gone 21-3 with him in the lineup, Zach Yates both has been, and continues to be, a football player.

A quick look at Zach’s stats and on-field production quickly underscores the point he is, indeed, a football player. Before we get to what he did as a sophomore, KPGFootball would like to remind everyone we selected Zach Yates to our inaugural, freshman all-state, football team, just last year. We had the honor of coaching Yates at the KYMSFA, East vs. West All-State Football Classic in Frankfurt, Kentucky the summer before his enrolling in high school. No one had to tell us what kind of player he was entering HS, nor do they have to tell us now. After a stellar freshman campaign, which landed him dead on every opponent’s game-plan, Zach had another fantastic year as a sophomore. Zach tallied 89 total tackles, 11 TFLs (tackles for loss), 3 QB sacks, forced 2 fumbles, recovered 3 fumbles, and even collected a pair of interceptions together with 45 return yards, scoring one defensive TD. In limited time in the offensive backfield, he also gained some yards rushing from scrimmage, though Zach is mostly deployed at LB.  Now, Logan County High School has some real star power up and down the roster. Caden McKinnis spent the year as one of the most coveted college prospects in Western Kentucky before settling on attending Austin Peay to continue his career. Tyler Ezell is one of the most accomplished QBs in West-Kentucky and will be a bone fide, All-State candidate at that position, next year, with the same being true of TB, Gary Hardy, whom gained between 14-1500 yards rushing this past season. Ask any coach on the schedule and he will tell you the kid which likely beat his team was the thick, short kid at LB running around making plays all over the football field. Zach Yates is a winner, and he makes kids around him winners. His attitude and penchant for coming up big in big situations, rubs off on the players around him.

As for Zach frame-wise, he reminds KPGFootball of another player in the Class of 2021 of whom we are right proud and whom we also believe to be quite a football player in Hoptown’s, William Long. Zach is 5-8 but weighs a hearty 220 pounds. He runs the 40  yard dash in 5 seconds flat, bench presses just shy of 300 pounds, and power cleans 210. Zach is not just a great athlete but a great student who possesses an incredibly high football IQ, starting all but the first game of his high school career. In talking with Zach’s coach, Todd Adler, KPGFootball has learned Zach is an ardent, eager, and diligent film study. According to Adler, in the season ending exit meeting with Zach, Yates told Adler he was ready to step up and lead the defense. Adler told KPGFootball in response to this that….at Logan County, we’re looking forward to what Zach Yates can do for us, both on and off the field, over the next 2 years.

One of our favorite stories about Zach Yates, largely because it makes our point for us, occurred after Logan County came to Hopkinsville and downed the Tigers 10-6 in the Stadium of Champions this immediately past season (2018). Incidentally, Logan’s victory marked its second win, from out of its previous three games, against the Tigers, a team prior to Adler’s taking over the program which was one against whom Logan County was not only losing but against whom the Cougars weren’t even competing. So, anyway, KPGFootball was interviewing Coach Craig Clayton, the head coach of Hopkinsville High School’s football team, when he offered to us…You know who beat us tonight, that number 15. I don’t know his name but he made three tackles tonight that, if he misses on any them, we have nothing but green grass and open spaces between us and the end zone. He won the game for them tonight! In the end, that observation by Coach Clayton, and Zach Yates’ play, on that night, against a key Class 4A, District 1 opponent against whom the Cougars haven’t, historically, played with very well, defines him, to KPGFootball, as a football player more fully than any seasonal statistic we can give you about either this player or his play.