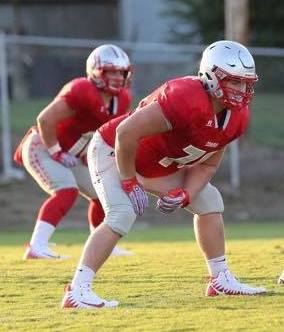 When KPGFootball refers to a player the ilk of Logan Smith, 6-3, 280-pound tackle from Corbin, as the “cornerstone” of Corbin’s football team, this wasn’t a word of reference on which we settled haphazardly. You will find we are word-smiths at KPGFootball and there aren’t any words we publish the import of which wasn’t both carefully weighed and considered before the article was run.

The cornerstone of a championship caliber football team, it’s very foundation, is along the lines of scrimmage. You can run from any formation you like, be as cute as you want to be, but you won’t win a Kentucky State Championship in football if you can’t RUN THE FOOTBALL and STOP OTHERS FROM RUNNING THE FOOTBALL. The ability to either run it or stop it rests principally upfront offensively or defensively.

That is why if KPGFootball was permitted to pick its football team, and we were going to play other football teams, we would begin our selections not in the backfield, not with skill-players, but with down and dirty trench-men. Logan Smith is a mauler with plenty of time left in high school to develop and chisel himself into something truly singular and he would be among the very first, if not the first, guy we would select.

Logan, who made our KPGFootball, sophomore, All-State team at offensive tackle played in 14 of Corbin’s 15 games, missing the State Championship this year owing to injury. Logan’s absence may have cost his team the title as Corbin lost to Central 20-19. With Logan in the lineup, Corbin in the State-Semis beat a Boyle County team, 21-0, which had won 25-consecutive football games and was the odds-on favorite to repeat as State Football Champions in the 3A classification. Without Logan in the lineup…well…

Logan Smith whose offseason training regimen since coming off injury may make the following numbers obsolete, is one of the stronger kids in Kentucky’s prospect class of 2021. We believe Logan benches in the neighborhood of 350-pounds and squats around 550. We also believe he is a 250-plus-pound power-cleaner.

Logan who is 280-pounds of not an ounce of fat on him, wears his weight well. He may well be the skinniest kid at 280 pounds to ever play high school football. There is nothing sloppy about Logan’s physique. There is nothing sloppy about his play. Logan Smith enters his junior year one of Kentucky’s premier offensive line talents and a kid with the size, length, athleticism, power, and explosion to be an easy FBS, power-5 type prospect.

Believe us when we tell you he’s a specimen. He’s also one of his graduating classes very finest football players and someone around whom any team could build a very successful running game. Yessir, KPGFootball would take five Logan Smiths and play you anywhere, any time. Hell, we will let you choose our running-back. It won’t matter anyway as defensive players aren’t too good at tackling ball-carriers from the flat-on-their-back, dead-opossum position.